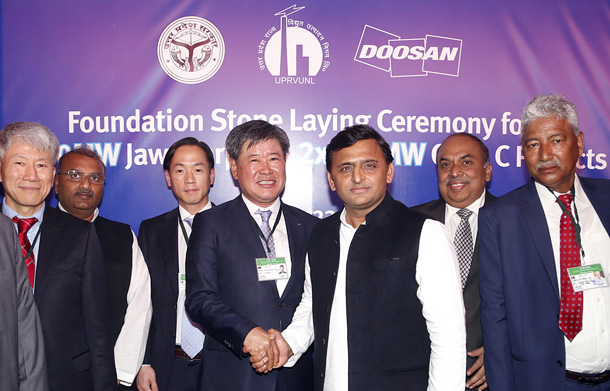 “The aggressive step to localize our corporation and focused marketing on Uttar Pradesh state, where the power supply is unstable, were major contributors to winning this bid,” said Kim Heon-tak, Doosan Heavy’s engineering, procurement and construction division chief.

While the Indian energy market is the world’s second-largest after China, projects from central or state governments are closed to companies without a manufacturing facility in the country, the company said in a statement.

Doosan decided to capture the Indian market by establishing a local corporation, DPSI, in 2011 by acquiring a local company, AE & E Chennai Works, and using its facilities to meet the country’s guidelines. DSPI has since landed about five trillion won in orders during the last five years.

Each newly built generator will produce up to 660 megawatts of energy, adding total 2,640 MW to the country’s most populous state.

“With this construction project as a stepping stone, we will speed up penetration into the fast-growing Indian energy market, where an annual 18 gigawatts of coal-fired power plant orders are expected until 2020,” Kim added.