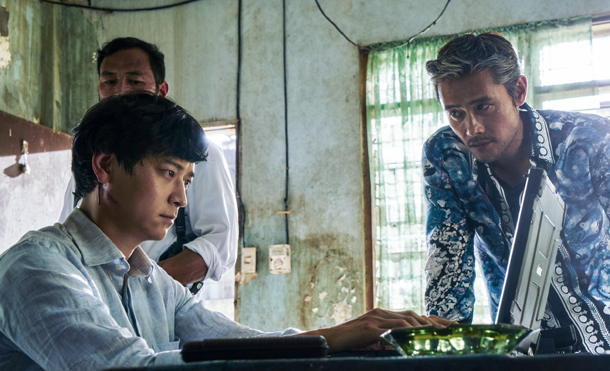 The star-studded crime action flick “Master” pushed aside the disaster movie “Pandora” to rule the local box office over the weekend, according to the Korean Film Council on Monday.

“Pandora” was forced to give away the first place spot, which it had been holding on to for two straight weekends, and dropped to third.

“Master,” starring actors Lee Byung-hun, Gang Dong-won and Kim Woo-bin, raked in 19.05 billion won ($17.1 million) through 2.23 million tickets sold at 1,501 screens, accounting for 56.7 percent of the entire sales. In the five days since its opening on Wednesday, the film has reached three million mark in ticket sales, earning 24.8 billion won in total.

The animated “Sing,” depicting cute animals working hard to achieve their dreams as singers, hit the second spot in its debut weekend by selling 297,500 tickets.

Although it debuted at fifth on its opening day on Wednesday, it gradually managed to climb up rankings.

The internationally-acclaimed “La La Land” was followed by “Pandora” to rank fourth in its third weekend. It remains to be seen how many more tickets the musical, which is set to dominate the 74th Golden Globe awards next month, will sell.

The romance-fantasy “Will You Be There?,” adapted from the French novelist Guillaume Musso’s best-selling novel, hit fifth. Despite the buzz it created for adapting the popular book, the audiences’ response has been meager. It has sold 995,000 tickets since it dropped on Dec. 14.

“Pokemon the Movie XY&Z” from Japan debuted in sixth, which was directly followed by another Japanese animation “Doraemon the Movie: Nobita and the Birth of Japan.”

Warner Animation Group’s “Storks” dropped to eighth from last weekend’s fifth, and was closely followed by the “Harry Potter” spinoff “Fantastic Beasts and Where to Find Them.”

“Egon Schiele: Death and the Maiden” rounded up the top ten in its first weekend.