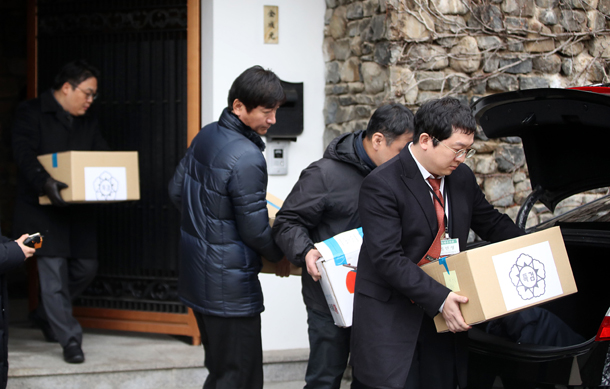 Investigators from the independent counsel collect boxes of documents and other possible evidence from the residence of former presidential chief of staff Kim Ki-choon in Pyeongchang-dong, Jongno District, central Seoul, on Monday. [YONHAP]

The homes of Kim Ki-choon, former presidential chief of staff, and Cho Yoon-sun, minister of culture, sports and tourism, were raided Monday as an independent counsel examines allegations they had a blacklist of nearly 10,000 figures in the Korean culture scene who held liberal views.

The main offices of the Culture Ministry in Sejong City were also raided the same day and a source from the special investigation team told reporters they collected “testimonies, data and reports” indicating that the blacklist was drafted by the Blue House and managed by the ministry.

The list, according to the source who has knowledge of the investigation, appears to have been written between 2014 and 2015 in the Blue House’s office of senior secretary for political affairs and later managed by the ministry’s Culture and Arts Policy Office.

Thousands of Korean artists who made the list for alleged antigovernment opinions were excluded from state-funded programs.

A coalition of artists’ groups brought up the accusations two weeks ago at a press conference and asked the independent counsel to look into the case as part of its wide-ranging probe into abuse of power by President Park Geun-hye and her confidante Choi Soon-sil.

Kim, who claims he knew nothing about Choi Soon-sil except her name, is also suspected of ordering Kim Chong, former second vice minister of culture, to dismiss six first-grade senior ministry officials in October 2014.

Meanwhile, Hong Wan-sun, the National Pension Service’s former chief of investment management, was summoned Monday to answer questions about his role in the controversial merger last year of Samsung C&T and Cheil Industries.

Under pressure from the Blue House, Hong is suspected to have played a chief role in accepting the $8 billion merger between Samsung’s two units despite industry experts saying the deal would be detrimental for Samsung C&T.

The deal was meant to solidify heir-apparent Lee Jae-yong’s grip on Samsung. If the independent counsel proves Hong was indeed coerced by the presidential office, it would mean President Park Geun-hye committed third-party bribery, which could put her in jail for at least 10 years after she leaves office.

When asked by reporters on Monday why the National Pension Service agreed to the merger, Hong only replied he would “faithfully explain” to investigators during the questioning. As to whether he was ordered by Moon Hyung-pyo, former minister of health and welfare and current head of the pension service, to okay the deal, Hong said, “No.”

The residence of Hong was raided last Wednesday and he was banned from leaving the country on Friday.