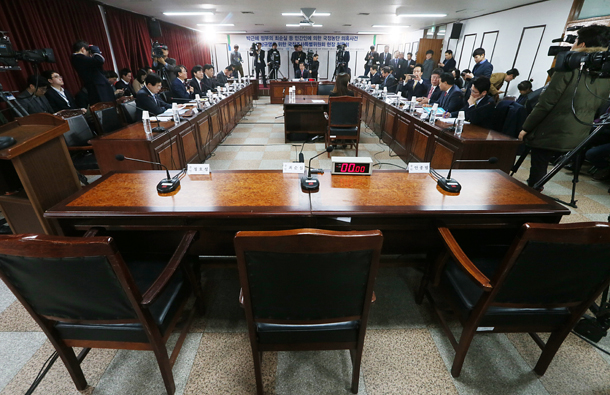 The special parliamentary committee investigating the abuse of power scandal holds a hearing inside the Seoul Detention Center in Uiwang, Gyeonggi, on Monday. Three witnesses - Choi Soon-sil, An Chong-bum and Jeong Ho-seong - didn’t attend. Later in the day, Choi was questioned on the condition that reporters and photographers be excluded. [YONHAP]

A parliamentary committee investigating the abuse of power scandal that led to the impeachment of President Park Geun-hye visited the detained woman at the center of the case, presidential friend Choi Soon-sil.

They didn’t get much out of her.

“We interrogated Choi in her room from around 3 p.m. to 5:30 p.m.,” said Saenuri Party Rep. Kim Sung-tae, who chairs the parliamentary committee. “But we were unable to extract much from Choi, who continued to complain of her health condition, including depression and heart issues.”

Filming and recording of the interrogation at a detention center in Uiwang, Gyeonggi, was forbidden by the Ministry of Justice and the center. Choi was detained after being charged with abuse of power, coercion, attempted coercion and attempted fraud.

“Choi continued to refuse to admit the charges against her outlined in her indictment,” said the Minjoo Party of Korea’s Rep. Kim Han-jung.

“She only answered questions to deny the charges,” said Saenuri Rep. Ha Tae-keung. “She said she stopped using the tablet PC that became crucial evidence against her from 2012.”

According to Saenuri Rep. Chang Je-won, Choi got teary during the interrogation but only at the mention of her daughter.

The two hour and a half meeting with Choi almost did not happen.

“Do you see that room over there,” said Minjoo Rep. Park Young-sun in video footage uploaded on Saenuri Rep. Kim’s Facebook Page on Monday afternoon. “Choi is inside that room but we are being blocked by authorities here from entering.”

The video showed officials at the detention center in Uiwang guarding the door and standing between the lawmakers and the room.

“We have been waiting for more than an hour and 20 minutes here,” Park said. “And the head of the detention center is refusing us entrance into the room where Choi is detained.”

Choi’s lawyer denounced the committee for trying to interrogate Choi in the detention center.

“An interrogation in the detention room [of Choi] violates the court’s decision,” said Lee Kyung-jae, Choi’s lawyer. “The court has decided that no one should come into contact with the defendant until Jan. 21 next year.”

Around 3 p.m., the lawmakers reached an agreement with the Ministry of Justice and Choi’s lawyer and were allowed to hold a closed-door meeting with Choi.

The hearing was originally scheduled for 10 a.m. Former presidential aides An Chong-bum and Jeong Ho-Seong, also detained for alleged involvement in the same scandal, were also ordered to appear before the committee there.

All three refused to show up. The no-shows Monday marked the third time Choi, An and Jeong ignored a summons. Choi cited health issues like a panic disorder.

The 18-member parliamentary committee investigating the Choi-gate scandal decided to split into two and interrogate the suspects in their rooms.

The six lawmakers met Jeong and An in a staff room of the Yeongdeungpo detention center.