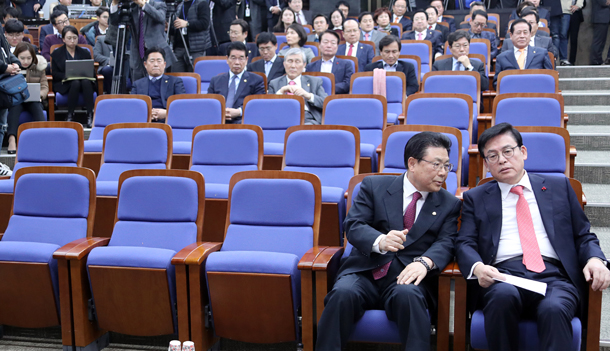 Saenuri floor leader Chung Woo-taik, left, and Secretary General Park Maeng-woo, right, converse at a meeting of Saenuri lawmakers in the National Assembly on Monday while lawmakers not loyal to President Park Geun-hye did not attend. [YONHAP]

In Myung-jin, the nominee for the Saenuri Party’s interim chief, said on Monday he was willing to drive out party members still loyal to President Park Geun-hye because doing so was the most important task to reform the party in the aftermath of her impeachment.

In, nominated to lead the Saenuri, which has been crippled by an unprecedented abuse of power scandal implicating the president and her friend, Choi Soon-sil, said removing pro-Park elements from the party would take a month or so, citing party procedures he must follow to drag pro-Park members from leadership positions.

“Just moving one’s place out of a rented house takes at least a month,” said the pastor in a radio interview with CBS on Monday. “It will take some time to drive those loyal to Park out of the party.”

The 70-year-old pastor was nominated by Saenuri floor leader Chung Woo-taik last Friday to helm the conservative party as it faces a mass defection by 30-some of its own lawmakers today.

In will be officially appointed as head of the Saenuri’s emergency council to steer party affairs on Thursday, when the Saenuri will convene the national committee meeting to elevate the pastor to the party’s No. 1 position.

While In expressed his intention to purge pro-Park elements, namely Suh Chung-won, an eight-term lawmaker who is a close friend of In, his remark that it would take some time to force them out raised doubts as to whether he has what it takes to achieve a sweeping personnel reshuffle that many see as necessary to recover the party from the Choi scandal.

Hit by the scandal, the Saenuri’s approval dropped to 16 percent while the opposition Minjoo Party of Korea enjoyed a 37 percent approval rating, according to the latest poll.

In is known as a moderate conservative who is in favor of providing humanitarian aid to North Korea, unlike most Saenuri lawmakers. His nomination came after pro-Park members turned down a demand by non-Park loyalists that they name Rep. Yoo Seong-min the interim leader to carry out far-reaching reforms of the party.

The demand was the final ultimatum of the anti-Park camp.

Some 30 anti-Park members are expected to defect today to create a new conservative party and field its own candidate for the presidential election next year.

In a last ditch-effort to dissuade non-Park loyalists from leaving, floor leader Chung Woo-taik, during a meeting with party lawmakers at the National Assembly, urged those on their way out to think twice, saying outgoing UN Secretary General Ban Ki-moon could choose to join the Saenuri instead of their new party. Those planning to defect skipped the meeting.

“I know many lawmakers who are thinking about defecting because they think UN chief Ban will opt to join the new party instead of ours,” said the floor leader.

Chung said if the Saenuri Party succeeds in reforming itself, Ban will choose the Saenuri. “I asked all of you here to call every party member mulling defection to stop them from leaving,” said Chung.