AI-related egg price rise could go on for months

AI-related egg price rise could go on for months 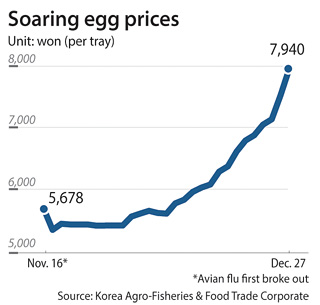 The government Tuesday decided to temporarily lift a ban on distribution of eggs that are safe but come from farms close to outbreaks of the H5N6 avian influenza virus (AI) to deal with a shortage that is driving up prices.

The price surpassed the 7,000 won level for the first time since 1996, which was when the Korea Agro-Fisheries & Food Trade Corporation (aT) started compiling data in its current form.

The highest price reported to aT for a tray of 30 eggs was 9,360 won, which is 34.1 percent higher than the highest prices offered last month, before the shortage began. Some local retailers are selling a 30-egg tray for as much as 10,000 won.

The Ministry of Agriculture, Food and Rural Affairs said it is hard for them to predict whether the prices will continue to rise, since that depends on how the virus continues to spread.

“We can’t predict exactly how long the prices of eggs will continue to go up, but we are expecting it to stay high for at least a couple of months looking at the current situation,” said Kim Yong-sang, a director at the ministry.

The Agriculture Ministry said that they will allow eggs that were raised from farms within 3 kilometers (1.86 miles) of areas where the virus has confirmed to be sold in the market for one day, Wednesday.

The government banned such eggs from being sold for a week starting last Wednesday due to safety issues.

The government banned the sales because it feared trucks moving the eggs would spread the virus. There are about 1,900 such vehicles in Korea.

“We have banned them from leaving the areas for a week now but decided to allow them just for a day,” said Kim Kyung-kyu, an official at the Agriculture Ministry. “Government officials will be present during the distribution process and we will have all the transportation equipment washed and fumigate all eggs before they leave the facilities. We have about 10 million such eggs that are stored right now and we expect that they will help solve supply issues.”

However, 10 million eggs are only about 25 percent of daily consumption in Korea.

The ministry said AI has hit every region in Korea except North Gyeongsang and the southern island of Jeju.