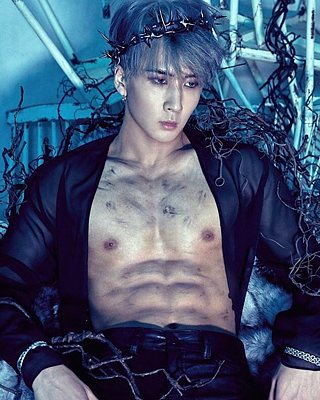 Rapper Ravi of K-pop group VIXX is preparing to unleash his first solo record featuring a number of high-profile musicians.

What was originally teased by his record label as the “Real1ze Project” earlier this month was revealed as the rapper’s plans to debut as a solo artist. His mini-album, which will feature rappers San E, Microdot, R&B singers Esbee, Jero, his bandmate Ken, and Jung Yong-hwa of idol band CNBlue, is being released on Jan. 9.

Before the record drops, he will unveil a song from his album on Jan. 4, and will later hold a solo concert at the Yes24 Muv Hall at Mapo District, western Seoul from Jan. 6 to 8. Tickets for all three dates sold out within ten minutes on Dec. 15.

The idol rapper previously worked with a number of popular artists on his past solo efforts. His self-produced mixtape “R.ebirth” featured “Show Me the Money” rappers Basick, Donutman, and Hanhae. He later worked with rising DJ group SAM&SP3CK and rapper Superbee on his later singles.

Meanwhile, his boy band is keeping busy with a number of performances at year end television music specials. They will perform at the 2016 KBS Song Festival on Thursday.