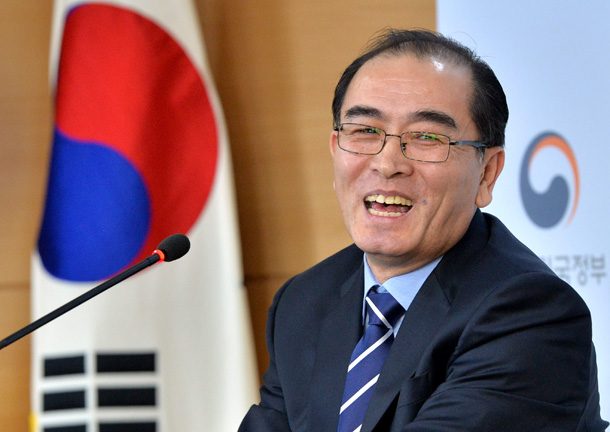 Thae Yong-ho, a former senior North Korean diplomat who defected to the South in August, laughs during a press conference in the Central Government Complex in central Seoul on Tuesday. [JOINT PRESS CORPS]

North Korea is in a “nuclear rush” to master its nuclear development plans by the end of 2017 in time for Seoul’s presidential election, said Thae Yong-ho, former North Korean deputy ambassador to London and the most senior diplomat to ever defect to the South.

The statement was made Tuesday in a press briefing at the Ministry of Unification in central Seoul. It was Thae’s first time to talk to local media since his arrival last summer.

The former North Korean diplomat, who made his way here from Britain through routes he refused to specify, said last week he would begin his “public activities” in South Korea and dedicate his life to inter-Korean reunification.

Thae did not mention exactly how he expects to work toward that goal, but several government sources who spoke on the condition of anonymity said he is expected to work as a researcher on North Korean affairs at the Institute for National Security Strategy, a state-backed organization affiliated with the National Intelligence Service.

On Tuesday, speaking for an unprecedented two and a half hours in front of roughly 50 Korean reporters, Thae said North Korean leader Kim Jong-un’s deadline to have its nuclear development plans all set to go by the end of next year was a key policy adopted by the 7th Congress of the Workers’ Party of Korea, the ruling party of the North.

Thae did not detail how Kim was planning to boost Pyongyang’s nuclear capabilities, but it appears he was referring to the ability to miniaturize a nuclear weapon and fit it on a medium- or long-range missile, which military experts believe the regime has yet to achieve.

If Pyongyang does secure the technology by the end of next year, said Thae, Kim will likely use it as a bargaining chip to launch “new negotiations” with Seoul and Washington on the condition that it be recognized as a legitimate nuclear-weapons state, which both countries have adamantly refused to do.

Kim’s reliance on weapons is so strong, Thae said, he would not give it up for any price - “not even $10 trillion.”

When asked about his thoughts on U.S. president-elect Donald J. Trump and how his recent election would affect Pyongyang’s relationship with Washington, Thae, who up to early this year worked as the No. 2 North Korean diplomat in Britain, said he “would have to wait and see” until Trump shapes his official stance on the North.

In principle, North Korea holds “instinctive repulsion” toward the Republican Party due to past experience with conservatives, added Thae.

“I do not think it is likely to happen,” Thae replied when asked by a reporter about a bilateral summit between the two countries during Trump’s four-year term, which officially begins next month.

Thae denied that he was seeking a top position in the South Korean government, saying his seemingly abrupt announcement last week to go public with his reunification efforts had nothing to do with President Park Geun-hye’s impeachment and a possible transition to a different administration, which means a major reshuffle in the highest ranks.

“When I first arrived here and was asked why I had come,” said Thae, “I didn’t use the expression ‘defection.’ I said that I wanted to surrender myself to the South Korean government.”

The former diplomat said that it was the South Korean government that told him in the summer he could begin public activities in late November or the end of this year at the latest.

While it appears Kim does make all important decisions in the North, Thae said it was a mystery where exactly the leader worked or where he lived.

He added that even Pyongyang’s highest government officials do not seem to know.

Government reports are filed and sent to Kim on a computer, but his whereabouts are kept top secret.

The regime is so secretive that Kim could escape to a foreign country for an entire month and nobody in the country would know, he said.

The move to publicize the execution of his uncle, Jang Song-thaek, once the second-most powerful man in the regime, on charges of treason in late 2013, and to disband an entire administrative department he led in the ruling party, was “swift” because Kim feared social disorder, said Thae.