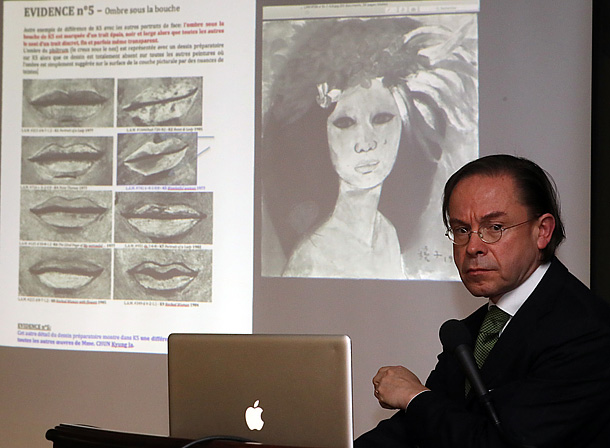 Jean Penicaut, CEO of Lumiere Technology, explains how the French laboratory concluded “Beautiful Woman” is a forgery at the Press Center in central Seoul on Tuesday. [YONHAP]

The 25-year-old controversy over whether the painting “Beautiful Woman” is Chun Kyung-ja’s or a forgery seems to never end. The artist’s descendants and the Paris-based laboratory, Lumiere Technology, refuted on Tuesday Korean prosecutors’ conclusion that the painting is authentic.

And on the same day, Korea’s National Museum of Modern and Contemporary Art (MMCA) issued a statement refuting the conclusion of the French company, which specializes in analysis of paintings with multi-spectral high-definition photography that it developed.

In a conference held at the Press Center in central Seoul, Jean Penicaut, co-founder and chief executive of Lumiere, expressed regret about the prosecutors’ report on Dec. 19, which raised questions about the French company’s analysis.

The prosecutors asked opinions of diverse institutions and art experts during the investigation it launched in April and Lumiere, recommended by Chun’s descendants, was one of them. The French company’s report, which was leaked one month before the prosecutors’ conclusion, said the probability is extremely low that “Beautiful Woman” was painted by the same person who made the nine portrait paintings considered to be Chun’s authentic works, which the laboratory analyzed for comparison.

Penicaut explained the details of the analysis process on Tuesday, emphasizing, “Our probability systems have been verified by French mathematicians.”

But the prosecutors said in the Dec. 19 report, when Lumiere’s systems of measuring and calculating probability were applied to the nine authentic paintings in the comparison group, two of the nine paintings also had very low probability of being authentic, namely 4 and 4.3 percent.

“The prosecutors said they applied our measurement systems but I’m curious how they did it … they made no inquiries with us about the application,” Penicaut said.

The MMCA said in a statement that Lumiere’s method of probability measure has serious problems. Penicaut offered to issue a separate statement explaining the math.