Police to arrest man for causing havoc on flight

Police to arrest man for causing havoc on flight 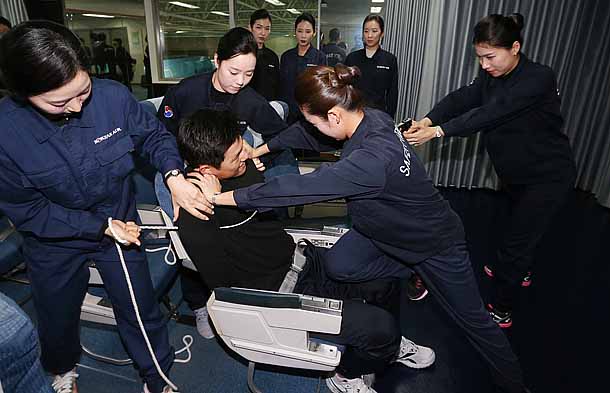 Police on Tuesday requested an arrest warrant for the man who drunkenly attacked passengers and crew members on a Korean Air flight from Hanoi to Seoul for violating the Aviation Safety and Security Act.

The man, a 34-year-old named Lim Bum-jun, was seated in prestige class (business class) on Dec. 20 when he struck another passenger in the face and attacked cabin crew who tried to restrain him. He was subdued only after the crew and others, including American pop singer Richard Marx, tied him to a seat.

“Police requested an arrest warrant for Lim for wreaking havoc on the plane and violating the Aviation Safety and Security Act,” said a police officer. “This is a graver charge than a mere disciplinary action for violence on a plane.”

The charge is the same that former Vice President of Korean Air Cho Hyun-ah received in 2014, over the infamous “nut rage” tantrum. She was sentenced to one year in prison in her first trial, but in her appeal was sentenced to 10 months with two years of probation. Suspects charged with violating the Aviation Safety and Security Act can be sentenced to up to five years in prison. 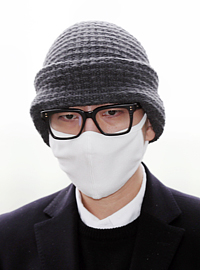 Korean Air announced on Monday that it permanently banned Lim and cancelled a flight he reserved on Dec. 8 to travel from Seoul to Hanoi tomorrow. This is the first time the airline has issued a lifetime ban on anyone.

“This is the second time Lim made trouble during a flight,” said Ji Chang-hoon, president of Korean Air, during a press briefing at a crew training center in Seoul on Tuesday. “He will never be able to board our flight again.”

“Additionally, crew members will be trained and encouraged to use a stun gun on any trouble-making passenger during a flight,” Ji said. “Formerly, a stun gun could be used only when there is a dire threat to a crew member or passenger’s physical being or life, or only when the troublemaker was seriously compromising the flight’s safety.”

It took some two hours for the cabin crew to tie Lim to a seat during the flight on Dec. 20. “Passenger next to us attacked passengers and crew. Crew completely ill trained,” the pop singer Marx later posted on Twitter.

According to the Ministry of Land, Infrastructure and Transport, the number of violent incidents on planes recorded by seven airlines in Korea jumped from 191 in 2012 to 460 in 2015. Among those recorded last year, smoking during flights marked the highest number, 381, while other incidents included verbal abuse, carousing, physical assault and threats.