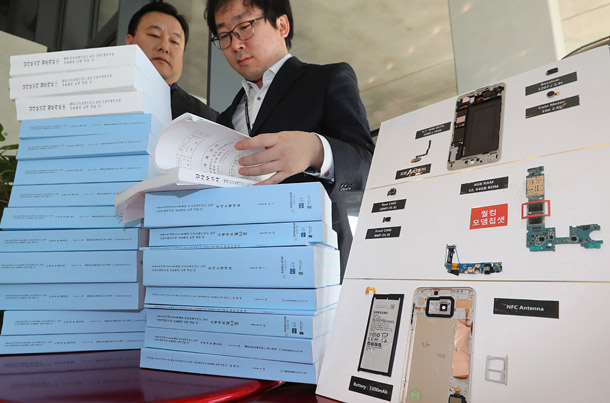 A Fair Trade Commission official looks at some of the case reports on alleged unfair business practices by U.S. IT company Qualcomm at the antitrust agency office in Sejong on Wednesday. Qualcomm was slapped with a 1.03 trillion won (851 million dollar) fine. [YONHAP]

Qualcomm, the San Diego-based smartphone chip developer, on Wednesday was slapped with the heaviest fine ever levied by the Korean antitrust agency - 1.03 trillion won ($851 million) - for bullying smartphone manufacturers and violating antitrust laws.

Qualcomm immediately said it will appeal the Fair Trade Commission’s decision as well as the size of the fine in a Korean court.

If it loses, it will be the second-largest fine levied on Qualcomm after the $975 million settlement it made with the Chinese government over its licensing practices in February 2015.

The Fair Trade Commission said Korea was the first country in the world to fine and order changes to Qualcomm’s business practices, which it said limits competition and forces unfair contracts on smartphone manufacturers. China’s settlement was about royalty payments. The FTC’s investigation of the company lasted 21 months. 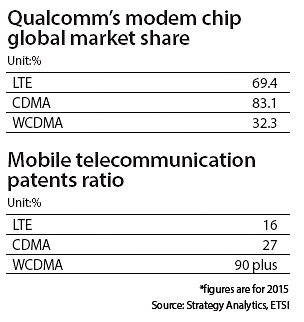 The Korean decision could have an effect on ongoing investigations of Qualcomm in other markets, including Europe and Taiwan.

The FTC said it penalized the global smartphone chip maker for misusing its dominant market position to force contracts on smartphone manufacturers and deny access to its patents with the goal of ultimately limiting competition.

The antitrust agency said its investigation was not limited to the impact of the company’s practices on the Korean market but extended to the global market. It pointed out that major international players were forced out of the market such as Marvell and Nvidia, which exited the modem chip market last year.

“What we focused on was the anti-competition actions [of Qualcomm] in the chipset licensing market,” said Shin Young-sun, FTC secretary general. “This is not only limited to Korean companies but affects the global modem chip market.”

In deciding the fine, the FTC said it considered the impact Qualcomm’s business practices had on the Korean market. This included the impact on non-Korean companies such as Apple and Intel, who sell products and services to Korean consumers and clients.

The FTC said Qualcomm denied or limited licenses of modem chips to other developers, including Korea’s Samsung Electronics, Taiwan’s MediaTek and U.S. company Intel, which is not allowed under the Fair Reasonable and Non-Discriminatory commitment Qualcomm signed with the United Nation’s specialized agency ITU and the European Telecommunication Standards Institute (ETSI).

Additionally, the company is accused of forcing unfair licensing contracts on smartphone manufacturers, forcing them to accept one-sided conditions. This included denying or completely stopping the supply of all of its chipsets whenever a manufacturer failed to meet a demand made by Qualcomm.

Qualcomm was also accused of asking 200 or so global mobile phone manufacturers for royalty-free access to their patents, which put it in a more advantageous position than its competition.

“Chipset manufacturers can develop their own products but they would be vulnerable to patent attacks by Qualcomm [since the company has dominance in mobile modem patents],” said FTC secretary general Shin.

Shin said the reason Qualcomm didn’t provide licenses to its competition was because it could also earn more profit from royalties on the chipsets installed in finished products rather than getting royalties from other chipset developers.

However, the FTC secretary general stressed that the investigation wasn’t about whether Qualcomm profited from unfair royalties.

Qualcomm has as little as 16 percent to as much as 90 percent of the patents for mobile modem chips in such standards as CDMA, WCDMA and LTE.

It has a dominant position in the LTE market with a 69.4 percent share.

The FTC said it fined Qualcomm based on the revenues it was estimated to have made in Korea over the last seven years dating to November 2009 when it started denying patent licenses to competitors.

“The reason the fine grew is because the revenue [generated by the business practices that limited competition] was huge,” Shin said.

Under local law, the FTC levies a fine between 2.3 percent and 3 percent of the revenue that a company made. In Qualcomm’s case, the FTC applied a 2.7 percent rate.

Although it has never been disclosed, Korean manufacturers such as Samsung Electronics and LG Electronics have been paying annually $1.27 billion in royalties in total to Qualcomm, according to the FTC.

Because the company’s revenues in Korea are much smaller than those in China, Korea’s fine is proportionately higher than the settlement Qualcomm made with Beijing.

Qualcomm called the decision “unprecedented” and “insupportable” and accused the antitrust agency of violating its due process right granted under the bilateral trade agreement between Korea and the U.S.

“For decades, Qualcomm has worked hand in hand with Korean companies to foster the growth of the wireless Internet. Qualcomm’s technology and its business model have helped those companies grow into global leaders in the wireless industry. This decision ignores that win-win relationship,” said Don Rosenberg, executive vice president and general counsel, in a statement.