High-income earners continue to rise but at a slower rate

High-income earners continue to rise but at a slower rate 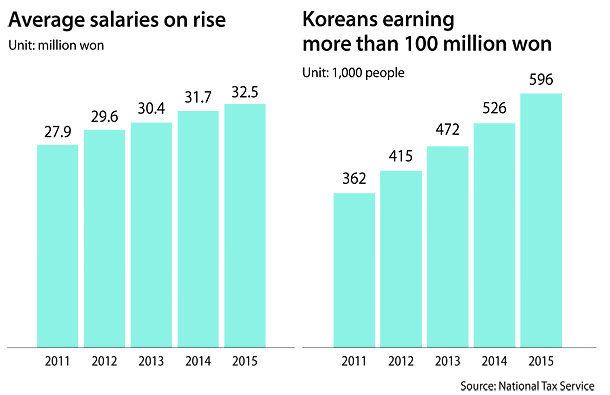 The number of Koreans who earn more than 100 million won ($82,802) a year continued to climb but at a slower rate. Their salary accounts for 15.8 percent of the total amount earned by all Korean workers.

People making more than 100 million won annually accounted for 3.4 percent of the number of workers, or 596,000 last year, the National Tax Service said Wednesday. The figure has risen 13.3 percent year on year, but the growth rate has slowed when compared to 42.3 percent in 2010. Since 2012, the rate has been remained at the 10 percent level.

“The average salary for Koreans continues to rise and has gone up 2.5 percent year on year to 32.5 million won last year,” said Chang Il-hyun, a director at the NTS. “The salary was the highest in the southern port city of Ulsan and was followed by the administrative city of Sejong and Seoul.”

The government data showed that the average salary was low in regions like Incheon, Gangwon and the southern island of Jeju.

Although the southern port city of Ulsan was hit hard by ongoing corporate restructuring in the shipbuilding industry, data showed that the gross regional domestic product (GRDP) per capita for Ulsan still was the highest, followed by Seoul.

GRDP per capita in Ulsan was 61.2 million won and was 35 million won in Seoul, the Ministry of Labor and Employment said Wednesday. It was the lowest in North Jeolla(25.3 million won).

“The number of businesses has been rising at a faster rate as it rose 2.4 percent in 2013 and 4.8 percent in 2014,” said Kim. “It appears that more numbers of women are opening up businesses.”

The data showed that business owners decided to launch in March, June and July, while February, May and August were unpopular months to start businesses.

A total of 4.07 million kiloliters (1.08 billion gallons) of alcohol was distributed in the local market last year, which is 1.5 percent higher compared to the previous year. During the same period, soju and whiskey deliveries dropped 0.2 percent and 5.6 percent each, while beer deliveries rose 1.7 percent.

“The amount of beer delivered to the market continues its rise starting from 2010 but that of whiskey has been declining,” said Chang.