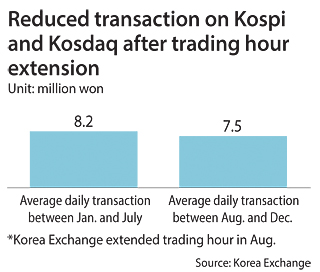 Stock market transactions in the second half were lackluster due to unfavorable market conditions at home and abroad, despite Korea Exchange’s expectation that extending trading hours would boost the volume of trading.

Average daily transactions between Aug. 1 and Dec. 27 on both the main bourse Kospi and secondary Kosdaq were 7.5 trillion won ($6.2 billion), compared to the 8.2 trillion won between January and July.

Korea Exchange extended exchange hours 30 minutes, until 3:30 p.m. on Aug. 1, in a move aimed at boosting equity and other financial transactions.

The trading hour extension was the first major change in 16 years since KRX eliminated a one-hour lunch break. The market opens at 9 a.m.

But, the second half saw a series of headwinds including the Galaxy Note7 debacle, Britain’s vote to leave the European Union and a domestic political scandal that claimed Park Geun-hye’s presidency.

The overall volume and transactions of the Kospi and Kosdaq shrank by 16 percent and 15 percent, respectively. The series of downbeat events also locked the Kospi below 2,100.

Analysts are divided as to whether the markets will recover next year.

“The earnings of the Kospi-listed companies have improved when compared to the past,” said Lee Chang-mok, head of NH Investment & Securities research center. “If investors’ sentiment turned more optimistic, the trading volume will increase.”

“If the United States is focused on expanding the government spending and introducing measures that will lead to a weak dollar, instead of quickly raising interest rates, the won-based assets can be attractive and Kospi will rise,” said Jang In-beom, head of Boo Kook Securities’ research center.

But others are more skeptical.

“The country’s transactions are heavily dependent on large-cap shares. There is no major factor to change the trend,” said Greg Roh, an analyst at HMC Investment Securities.