The great responsibility of a bell ringer : Overnight, Sin Cheol-min became caretaker of a national treasure

The great responsibility of a bell ringer : Overnight, Sin Cheol-min became caretaker of a national treasure 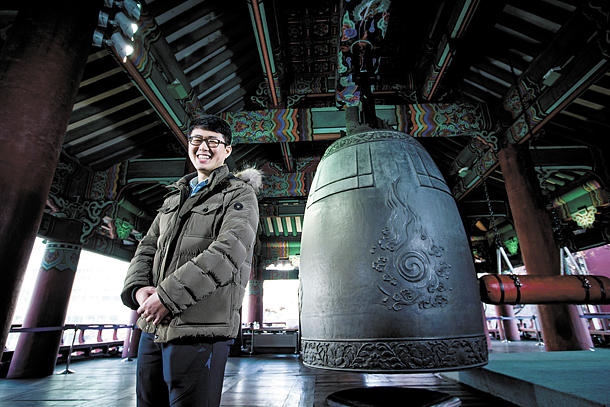 Sin Cheol-min, an official at the History & Cultural Heritage Division, has been working as the bell ringer of the Bosingak Bell since 2006 after the former bell ringer Jo Jin-ho passed away. [PARK JONG-KEUN]

For 43-year-old Sin Cheol-min, becoming a bell ringer wasn’t a part of his life plan. Until it was. After bell ringer Jo Jin-ho, who was the fourth generation to inherit the job in his family, passed away at the age of 79 after suffering from cancer, Sin became the next man to take over the sacred job.

“Please look after the [Bosingak] Bell,” Jo told Sin before passing away in December of 2006. At the time, Sin was 33 years old and worked in an office. Sin has now served as Jo’s successor for the last ten years.

Jo and Sin became acquainted with each other just six months before Jo passed away. Sin, who at the time was working as a manager at a firm hosting cultural festivals, visited Jo ahead of running one of his projects. The project Sin was preparing provided citizens with a chance to ring the Bosingak Bell from Tuesday to Sunday at 12 p.m. while wearing costumes from the Joseon Dynasty (1392-1910).

In order to teach others how to strike the bell, Sin first had to learn how to do it himself, leading him to study the method from Jo. Although striking a bell looks very simple on the surface, it wasn’t easy at all, according to Sin. Jo wasn’t a soft teacher, and he taught Sin how to strike the bell focusing on the minute details. Sin learned all the knowledge and skills that Jo had while serving as the bell ringer for 44 years. Sin learned which part of the bell he should hit, with how much strength and how much of a gap he should maintain between each ring of the bell. Sin couldn’t lose the tension, as Jo sometimes became furious when Sin couldn’t create the sound properly. “There shouldn’t be a brassy sound,” Jo often said, and stressed the importance of creating clear and heavy sounds.

Despite the nagging, Sin was very obedient to his teacher and worked very hard to master the hard job, which gradually led Jo to open his heart towards his student.

Since then, Jo would frequently ask, “Why don’t you try becoming a bell ringer?” But every time, Sin shook his head and said that he dare not take over the job. Although Jo had a son, he could not take over the family job due to his business. After learning his teacher’s family story, Sin also became concerned about who should succeed the job. Jo’s concerns grew bigger, as he knew his time was limited. Jo underwent surgery for colorectal cancer in 2005, a year before Jo and Sin met. “Even until 10 days before the teacher passed away, he came to Bosingak every day and expressed concerns about not having a successor,” Sin reminisced with tears in his eyes.

Despite the concerns, however, Jo’s dying wish came true, as Sin started taking over the job after the death of his teacher. The first duty for Sin was to ring the bell for the Watch-Night bell ceremony, on Dec. 31 of 2006. The following year, Sin’s expertise was recognized, and he was hired as a public official of the Seoul Metropolitan Government.

During the six months of lessons, the thing that Jo had emphasized the most was showing courtesy towards the bell. Both the teacher and the student addressed the bell by its title. It wasn’t until around a year after he became the bell ringer that Sin understood his teacher’s high respect towards the bell. On Dec. 30 of 2007, Sin severely hurt his back after he fell off of the bell. He was busily preparing for the Watch-Night bell ceremony at the time, and was cleaning the top of the Bosingak Bell.

“Although I paid respect towards the bell in my heart before climbing up [through a ladder], I was so busy that day that I skipped the procedure.” Since the accident, Sin still isn’t able to carry heavy loads. “The accident reminded me of the teacher saying that a bell ringer should always show courtesy towards the bell. I definitely learned what he meant through that experience.”

With a height of 3.78 meters (12.4 feet) and a diameter of 2.23 meters, the Bosingak Bell weighs around 20 tons. The one that hangs now was created in 1985. Since the original Bosingak Bell was designated as Korea’s National Treasure No. 2 in 1963, it has been preserved in the National Museum of Korea to prevent damage.

“Striking the bell requires lots of strength,” Sin said. “And the person who has to endure the aftershock of ringing the bell is the bell ringer that is holding on to the bell’s hammer. It requires a lot more energy than one thinks. After striking the bell 33 times, I sweat like rain.”

Everyday at 10 a.m., except for Sundays, Sin checks the condition of the bell. After silently hitting the bell numerous times with the 1.8-meter length hammer made of plantanus, he opens his arms to embrace the bell. He places his forehead on the bell to feel its vibration and to check whether there is a crack. At 12 p.m., he supervises citizens and foreigners taking part in an event to toll the bell 12 times. From 3 to 4 p.m., Sin climbs up to the top of the bell to wipe off the dust.

Every Friday, along with two guards, Sin stays up all night at the management building next to the bell to block drunk people from damaging the bell. Since it is located near a street filled with bars, intoxicated people often climb the fences to try and access the Bosingak, making demands such as attempting to strike the bell and use the toilet.

To prevent any disturbing accidents from happening, Sin supervises the bell all night through CCTV. If he spots intoxicated people near the Bosingak, he runs outside the building while blowing a whistle to guide them elsewhere.

Although living as a bell ringer is tough, Sin does not regret it. As the time passes, he “feels more and more responsible with strong sense of duty.” Based on the responsibility, he has even set a new life goal: to hand over the role to his teacher’s grandson.

“I want to link the teacher and his grandson. I’m basically a temporary bell ringer. Until my teacher’s family retakes the job, I will well protect the Bosingak Bell,” said Sin. 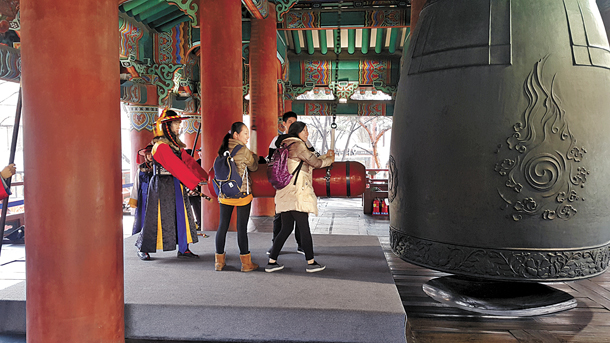 As of Dec. 20, 22,120 visitors, both locals and tourists, have taken part in the bell-striking ceremonies. This event, which allows ordinary people to have a go at striking the Bosingak Bell, kicked off on Nov. 21, 2006. Everyday at 12 p.m. except for Mondays, those who have made reservations are given a chance to strike the Bonsingak Bell 12 times.

The oldest person to have participated in the daily activity was a 102 year-old lady, who struck the bell in 1999. Renowned celebrities such as the swimmer Park Tae-hwan, actor Choi Bul-am, prolific director Im Kwon-taek and the late legendary mountaineer Park Young-seok also participated in this popular event.

According to Kim Gyu-ri from the History & Cultural Heritage Division, many people sign up for the event because a number of people have achieved what they have wanted after striking the bell.

A couple who were having difficulty conceiving a child became pregnant a month after the wife hit the bell while another visitor passed the teacher certification examination.