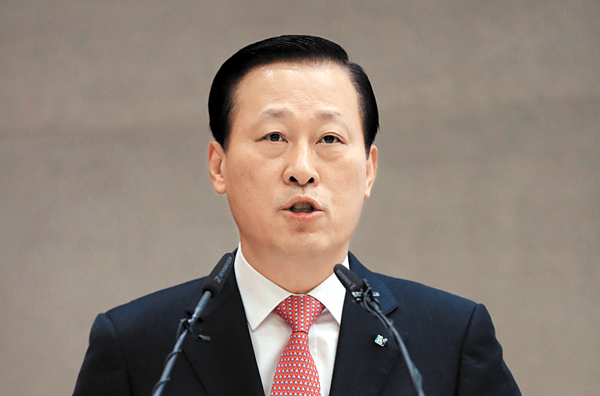 Kim Do-jin, new CEO of the Industrial Bank of Korea, speaks during an inauguration ceremony. [YONHAP]

The new CEO of the Industrial Bank of Korea (IBK) vowed to diversify the bank’s business portfolio and strengthen its global presence during an inauguration ceremony on Wednesday.

Kim Do-jin, former senior executive vice president of the IBK, said that he aims to increase non-banking businesses such as insurance and securities to 20 percent from the current 10 percent.

“Our future remains uncertain if we fail to change the current profit structure with 90 percent of profits coming from the banking business,” Kim said.

To achieve the goal, Kim said, the IBK will foster partnerships across its affiliates.

As a state-run bank dedicated to providing loans and development finance to small and medium-sized enterprises, the IBK’s business has centered on loans and related banking services.

“We will find the countries where our knowledge of small and medium enterprise finance is needed and places with similar cultures, which could facilitate localization,” Kim said. “Then, we will go on to find partners and conduct mergers and acquisitions.”

Amid low interest rates and sluggish growth, he emphasized the need to increase profits in foreign currencies and the investment banking business, segments that are less affected by interest rates.

The bank is known for its rigid and conservative culture and Kim called for “change and innovation for survival.”

Kim, 57, is replacing Kwon Seon-joo, the first female head, as chairman and CEO.

Kim joined IBK in 1985. He has served as chief of the bank’s management strategy group since 2014.