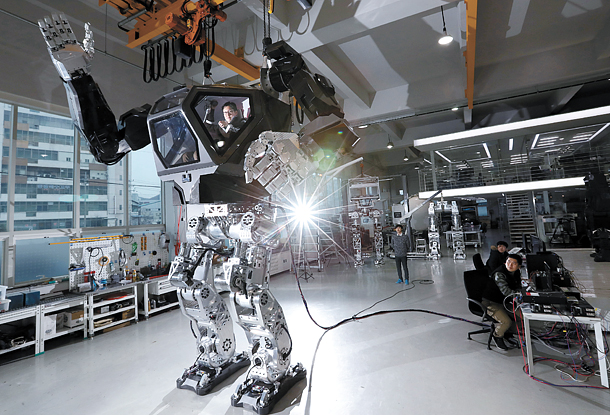 Method-2 is the biggest robot made in Korea. A short video of the manned robot moving was released on Instagram on Dec. 16 and attracted 900,000 viewers.

On Monday, a team of JoongAng Ilbo reporters visited Korea Future Technology’s development center in Gunpo, Gyeonggi, to grab the opportunity to control this robot in person.

Method-2 stood four meters (13 feet) tall. The ground trembled enough to shake a coffee mug on the table whenever the robot stepped forward. Its cockpit was larger and more ergonomically designed than expected. The light inside had a red shade as seen in science-fiction movies. Concept designer Vitaly Bulgarov, who helped create robots for DreamWorks and George Lucas films, led Method-2’s design.

Movement control for the robot, which was attached to the ceiling with iron chains, was limited to its upper body. A long sensor attached from the shoulder to fingers recognized the controller’s motions. Arm, wrist joints and even finger movements were re-enacted. As a reporter punched a fist in the air, the 130-kilogram (287-pound) arm moved at a similar speed. The Method-3, Korea Future Technology’s next project set to unveil during next year’s second half, will be designed to improve control of the lower body.

On the back, a cable was connected to the electricity, which powers Method-2. It is equipped with 45 electric motors and an electric battery that helps the robot move about 90 minutes without a cable.

Robot specialists are most interested in Method-2’s lower body because it was designed to walk upright - the most difficult technology to apply to a robot.

It still lacked stability: The body moved from side to side every time a leg moved. Jumping over obstacles or controlling movement on bumpy roads is still impossible. Durability is another issue. Components continuously grind each other when moving joints, but today’s technology isn’t mature enough to endure this.

This is why robot specialists point to developing the lower body as a core task. “In terms of engineering, Method-2 is far from being capable for commercialization. Fixing its body with an iron chain from the ceiling seems to have come from the insufficiency of the lower body’s stability,” said a robot researcher who was said to have received an offer to co-work with Korea Future Technology. “Although Method-2 is the biggest robot in the country, the individual technologies used in it are not revolutionary once observed up close,” the source added.

Nonetheless, Method-2 is meaningful in that it combined many relevant technologies - in electric power, motor drivers, accelerator, metal forging, structural design - into one big robot.

“Criticism from robot researchers tend to be too theological,” said Lim Hyun-kuk, CEO of Korea Future Technology. “I won’t consider them too much unless their comments turn out to be huge barriers for commercialization.” If the body material can be changed to carbon fiber, the weight will be reduced to 1.2 tons, which would solve the durability problem, he said. Relevant research is on the way in the company’s carbon fiber manufacturing center.

Korea Future Technology’s next project, Method-3, will have three upgrades. “First, we’re going to complement the robot arm so that it could easily break an iron plate. In function, Method-3 will be able to walk on bumpy roads. Design will be completely changed as well - I already asked Vitaly for a whole new design,” said Lim. 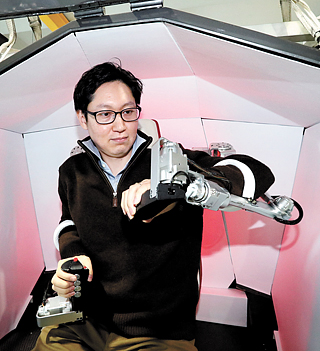 The robot’s 130-kilogram arm moves according to motions detected by the sensor on the controller’s arm. [JUN MIN-KYU]

The start of Lim’s dream for robots was the animated film “Robot Taekwon V,” a hit in the late 1970s. His homepage domain until recently was www.1976ir.com, with 1976 the year when Robot Taekwon V was released in theaters and “ir” standing for “from imagination to reality.”

When asked for which purpose he wants to use robots, Lim answered that it “depends on the company’s clients.” The company’s Japanese office is already working with the Fukushima government’s disaster planning team to develop a robot for use in emergencies like earthquakes and fires.

Lim studied business management at Keimyung University, but instead of applying himself at school, worked in a computer company. He eventually was kicked out.

Some say that the video was released to attract investors. Lim disagrees. “Every research and development conducted by Korea Future Technology is financed from the parent group’s internal reserve and we plan to continue this way in the future.”