Moon to accept all other candidates’ demands

Moon to accept all other candidates’ demands 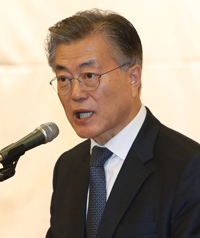 Former Minjoo Party of Korea chairman Moon Jae-in, who is leading in most polls for the next presidential election, said he is willing to accept all demands by other party candidates preparing their bids to win the party nomination.

In an interview with the weekly magazine SisaIN, the former human rights lawyer said he was open to “all demands,” including a run-off primary election.

Under the run-off voting system, the two finalists of the primary race compete in a final round to clinch the nomination if neither wins a majority in the initial contest.

“It’s not important for me to calculate who will benefit from the primary rules,” said Moon in the interview. “As I am a frontrunner, I will take action in a way to avoid internal conflict over the nomination contest rules.”

With the growing prospect of an earlier-than-expected presidential election, pending the Constitutional Court’s verdict on an impeachment motion against President Park Geun-hye, tension has been on the rise among opposition members.

Now they must prepare to enter the primary to defeat Moon, the former presidential chief of staff for President Roh Moo-hyun, who lost to President Park in 2012 by a margin of less than 4 percent.

Central points to be debated include how much the Minjoo Party is willing to reflect the choices of people who are not party members and whether it would accept mobile-phone voting, which will allow more people without party membership to take part in the primary race.

Seoul Mayor Park Won-soon, who has not been shy of expressing his presidential aspirations, demands voting at polling stations and that candidates’ speeches be delivered at the nationwide primary tour.

The mayor’s demand reflects the view that he is stronger than Moon in giving powerful and resonant speeches.

“Most of Moon’s speeches lack the powerful messages that move the heart,” said one of Park’s aides, who asked not to be named. The Park camp also opposes mobile-phone voting, claiming it distorts the real sentiment of voters.

Seongnam Mayor Lee Jae-myung, who recently rose through the ranks to No.3 in the poll for the presidential race for his straightforward criticism of the Park administration and demand for her impeachment in the early stages of Choi-gate, demanded a run-off primary election and higher participation rate by non-party members.

It is believed this is to capitalize on his high public profile.