KPU students learn by jumping in at deep end

KPU students learn by jumping in at deep end 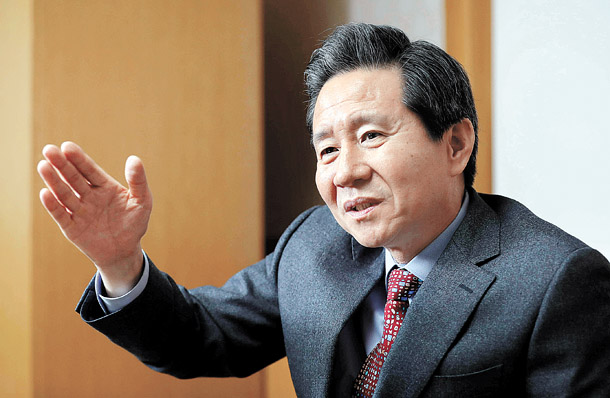 Lee Jae-hoon, president of Korea Polytechnic University, says “I just want businesses to try employing our students and see how able and versatile they are, and how they will be able to carry out any task given to them.” [SHIN IN-SEOP]

Korea Polytechnic University (KPU) sits in the middle of the Ansan-Siheung Smart Hub Complex in Gyeonggi, where over 20,000 companies are located. Among all the universities in the Seoul-Gyeonggi region, KPU has been ranked first place for the employment rate of its graduates five years running, as 77.6 percent of its seniors are employed straight after graduation. The secret is that the school utilizes the nearby companies’ offices as classrooms. Students practice their work skills in the companies, while the companies receive technical support from the school.

“Our school’s location is our strongest asset,” said Lee Jae-hoon, president of KPU since 2014. Next year marks the 20th anniversary of the university, for which the school is preparing innovative programs to help its students not only get jobs after graduation, but open up their own businesses.

The following is an edited excerpt of an interview with Lee.

Q. You have been in public office for more than 30 years. Do you think this helped you look at what a university should do differently from other professors?

A. Mencius taught that noble men should take pleasure in fostering young students, and I think I see why. When I meet with students’ parents, I see that they are worried, but at the same time, they hold high expectations of their children. So after the entrance ceremony for freshmen, I show parents around the school and explain to them how we teach our students.

Universities used to be ivory towers where intellects would only bury themselves in books and research. But I used to work at the Ministry of Trade and Industry [now the Ministry of Trade, Industry and Energy] and thought it was crucial for a university to supply a quality labor force. We plan our lectures so they are as practical as possible, and so that students will be useful at their workplaces.

KPU ranked second place as an education-oriented school in the JoongAng Ilbo’s evaluation of universities this year. How do you feel about that?

I am pleased that the school has been recognized as properly teaching students. It was the highest rank we ever got. We got especially good scores on the student education and student’s achievements. Thankfully, many programs the school has been focusing on, such as employment, opening new businesses and field work, have shown good results. In fact, our school has been getting positive feedback from companies. Employers compliment our students for adapting well to actual workplaces.

Did you know that KPU is considered to offer the most field work for students?

It’s mandatory for our students to have at least 320 hours of experience in companies before they graduate, which is not so hard since the school is surrounded by more than 20,000 companies in the Ansan-Siheung Smart Hub Complex. Our school has achieved a harmony with the industrial environment; there are 200 company labs within our campus, 160 of which are called engineering houses where the students, professors and researchers all work in the same space. The professors help the company staff develop new products, and the students get a chance to take part in the process.

Would you say that the large amount of time spent in a real company environment contributes to the high employment rate of the graduates?

Of course. We always encourage students to come up with ideas that may be used in the actual workspace, even in their indoor lectures. Some students who were not particularly interested in getting a job change their minds when they get the chance to do some actual work with firms. Quite a few company employees even ask the students themselves whether they would like a job in the company, already having worked together in the engineering house.

The employment rate is impressive enough, but how did 85.9 percent of them get a job related to their majors?

Because jobs and majors are usually considered to be two separate things these days, some people say what you major in doesn’t really matter. But we think differently. If you start working with companies in researching and developing new products, then your major doesn’t stray from your actual work. And since students are already prepared for the job, 91.2 percent of the newly employed students get a permanent position in the company. Within the school, we take pride in our high employment rate, and also the fact that the quality of the labor is very high.

I heard that the school’s curriculum is famous for being very tough. Don’t students have a hard time settling in?

Some students might think it’s tough because the lessons and field work all demand full concentration all the time. There are rare cases in which student finds the curriculum too difficult and drop out. Nevertheless, we take pride in the fact that our school teaches the student well enough to be put into the work scene straight away, without the need for the company to reeducate them.

What about teaching the students how to open their own businesses?

More than 90 percent of students at the KPU are engineering students. In the fourth industrial revolution, what the society needs are engineers who can compete with their very own ideas. Ever since the Small and Medium Business Administration nominated us as the leading school for founding new businesses in 2011, the school has seen 147 new companies established in six years. While some are opened by faculty members or by the school in collaboration with locals, about one-third were developed by the students.

We provide our students with something called the I Studio, in which students are free to develop ideas into prototypes to be tested. About 60 percent new businesses are based on manufacturing. That means we have that many students gifted with their own skills.

But these days, isn’t it very hard to make it with one’s own business?

The most important thing is whether you can turn failure into something worthwhile. KPU has come up with a co-op association between nine companies developed by the school’s graduates and four school clubs so that even a new business that doesn’t succeed doesn’t go to waste. It’s called the Onsaemiro co-op. There, we encourage students to exchange ideas, develop their business models and support each other. It’s kind of like a safeguard. On the school’s part, we have a holding company inside the campus that helps the students run their very own businesses.

There is an additional dormitory building that we plan to complete next year, which will house about 1,000 students. With the newly built dormitory, 35 percent of our students will be able to reside on campus. Also, companies within the Ansan-Siheung Smart Hub will start an Academic-industrial Convergence Campus program, which will help companies commercialize their technology and provide re-education to faculty members.

We’ll also continue our globalization efforts. We’ll develop global co-op centers not only with the United States, but also China and countries in Southeast Asia where there is a lot of potential, so that our students can look for opportunities there.

Do you have anything to say to parents and businessmen?

I would like to ensure parents that when they send their children here to KPU, we will successfully make a skillful technician with an upright character out of the youth, one who will help advance our society.