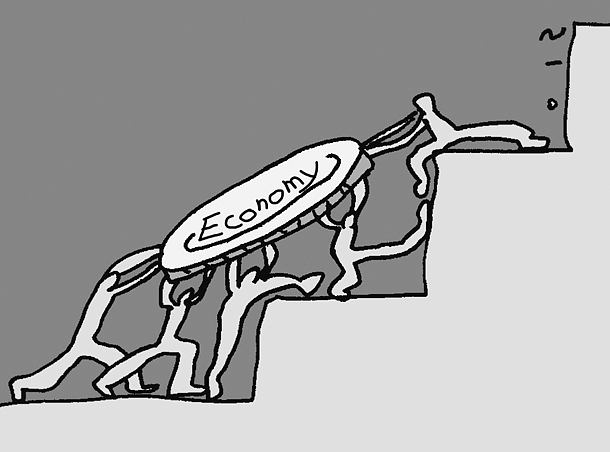 Money talks, and when you listen hard, you can understand the economy a bit better. I want to talk about a big figure — 1,000 trillion won ($825 billion). Six years ago, I wrote a column on the advent of the age of 1,000 trillion won referring to milestones passed in gross domestic product, market capitalization, trade turnover and household debt. I had hoped the first three would keep growing to new numeric thresholds, while the last one would go down. Those hopes were dashed. Household debt reached 1,300 trillion won. Trade volume has been shrinking ever since topping $1 trillion in 2011. GDP and market cap have grown, but in an unbalanced manner.

Prospects for the 2017 economy are bleak. Interest rates in the United States are rising. Three quarter-point hikes in the Federal funds rate are possible next year, and the increases may be bigger. Some predict the base rate could reach 4 percent in two years. Korea’s interest rates must rise along with the U.S. benchmark. Korea has six months at best to respond to the rises in the U.S. The Bank of Korea’s rate of 1.25 percent could go up by 3 percentage points if it follows the U.S. A 1 percentage point gain in the base rate increases interest on household debt by 9 trillion won.

The housing market is another serious worry. Oversupplies as a result of a government-led housing boom could become a nightmare if home prices fall. Real estate bubbles bursting are a common challenge around the world. Canada fears a 30 percent plunge in housing prices and Hong Kong 15 percent. If mortgage-backed loans turn sour as a result of home prices tumbling, the entire financial system could be wrecked. Former Financial Services Commission chief Kim Seok-dong warned that the economy could be harmed beyond repair even from a small movement.

The public sector is also vulnerable as a result of its mounting debt. Korea’s public sector debt, which includes the liabilities of the central government and state entities, reached 1,003 trillion won at the end of 2015. That was 64.4 percent of the GDP. The pace of growth is even more worrisome. The government maintains that Korea’s levels are passable when compared to other countries. But that is not very encouraging. A presidential election will be held next year. Candidates will make many populist welfare promises. Overspending could impair our fiscal integrity. Presidential hopefuls are already floating the idea of institutionalizing a basic income welfare payment to the poor that would cost billions of dollars.

Another danger is short-term investment funds that are estimated by the Bank of Korea to have reached 978.22 trillion won as of the end of September — up 100 trillion won over a year earlier. Those kinds of investments chase profit in the short term. When the economy is getting worse, they have a tendency to seek security: instead of making investments that have high-risks but also high returns, they are just stuck in the coffers, the equivalent of cash in a mattress. That does nothing to help the economy. If money does not flow, the economy sputters.

The economy remained stubbornly inert even as the BOK lowered the base interest rate by 1.25 percentage points over the last two years. The movement of funds is even less unpredictable. A rash movement in funds could bring about a rout in the capital market. The risk of that lessens when the economy starts performing well. The biggest risk to the economy is uncertainty.

Uncertainties darken next year, particularly political flux. We like to be hopeful at the beginning of a new year. But the mood for next year is gloomy. Making matters worse, election season is nigh.