Economic ministers including Finance Minister Yoo Il-ho, center, announce the government’s economic management plan for next year, which includes spending 20 trillion won in the first three months in hopes of keeping the economy from falling further, at the government offices in central Seoul on Thursday. [YONHAP]

To keep economic growth from falling below the mid-2 percent level next year, acting president Hwang Kyo-ahn said the government will fully utilize its resources, including a 20 trillion won ($16.56 billion) budget that the government will spend in the first quarter.

“In the new year, economic policies will be focusing on stimulating the economy, stabilizing the livelihoods of middle and lower income households and pushing with structural reforms in preparation for the future,” Hwang said in a meeting with economic ministers on Thursday.

“In order to turn around the slowing economy, the government will use every available resource, including the government’s coffers and the public sector, in supporting the economy aggressively.”

Hwang stressed the urgency of creating an environment in which households and companies have the confidence to return to normal economic activities. Hwang’s plea echoes growing desperation over a sinking Korean economy. On Thursday, the government lowered its outlook for 2017 economic growth to 2.6 percent - the first time since the late 1990s that it has set an economic growth target for the following year below 3 percent. 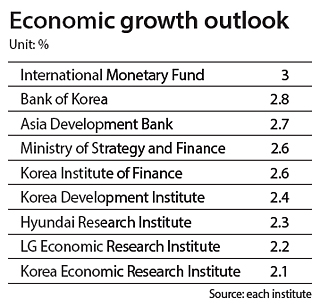 The government even estimated this year’s growth at 2.6 percent, a turnaround from its previous position that 3-percent growth was in reach with the help of a supplementary budget injected in the third quarter.

Domestic demand is weakening after it played a crucial role in keeping the economy from declining further as exports struggled over the last two years.

“Today our economic team stands in front of you with a sincere sense of emergency and strong determination,” Finance Minister Yoo Il-ho said on Thursday while announcing the government’s economic management plan for next year.

“It is worrying that even the domestic economy, which has held on fairly well, might fall. Rising interest rates and crude prices will impede households from spending and recently economic confidence has been contracting rapidly.”

Analysts say Korea’s political instability in the wake of the impeachment of President Park Geun-hye is a major factor in the weak domestic economy.

The political instability was one reason the Hyundai Research Institute lowered its growth outlook for next year earlier this week from 2.6 percent to 2.3 percent.

“The rise of the unexpected political risk is quickly souring the sentiments of all economic participants and in particular the freezing of consumer confidence is at a critical state,” said Hong Joon-pyo, Hyundai Research Institute senior analyst. “The influence of the political risk [caused by the impeachment] is huge. If we do not resolve the situation as quickly as we can, it will have exceptional negative influence over the economy until the first half of the year.”

Other institutions have lowered their outlooks to 2.2 percent and even as low as 2.1 percent.

However, the government takes a different approach. Vice finance minister Choi Sang-mok said when it was planning next year’s economic policy plan, the government didn’t have the political situation in mind.

“The plan shows [the government’s] will to achieve the targeted growth [2.6 percent] by executing the maximum support we can,” Choi said. “We don’t take the current political situation into account.”

Another government official said the government doesn’t consider its outlook more optimistic than others since its policies could have the effect of boosting the economy by roughly 0.2 percentage points.