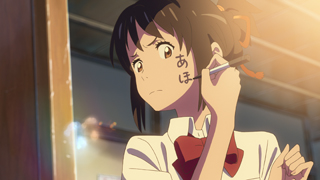 Japanese film director Makoto Shinkai, who is globally popular for his colorful anime scenes, is back with another anime flick “Your Name.”

Taki is an ordinary boy living in Tokyo. Just like any other morning, he wakes up to the sunlight beaming on top of his eyelids, but something feels different - he has woken up in an unknown girl’s body in the countryside. The same thing happens to country girl Mitsuha, who wakes up in the body of Taki. The two are totally aghast at first, but have no choice but to get used to each other’s lives.

The body switch comes and goes for the two, sometimes waking up in each other’s bodies and sometimes not. Meanwhile, they find a way to communicate with each other, which opens up the possibility for the two to actually meet.

A romantic comedy bound to make the whole audience burst into laughter is coming to theaters.

The story kicks off as protagonist I-hyeong, played by Cha Tae-hyeon, buys a bouquet of flowers to propose to his girlfriend. On this special day, however, he gets in a car accident and falls into a coma. Meanwhile, his soul goes into other people’s bodies and I-hyeong forgets about his real identity.

Those other bodies belong to people for whom love seems to be the most difficult thing. Mal-hee, played by Kim Yoon-hye, has perfect grades and is the top student at school, but her relationships with boys always turn out the wrong way. The situation is not so much better for Park Chan-il, played by Sung Dong-il, who is on the brink of getting a divorce with his wife. Teacher Yeo-don, played by Bae Seong-woo, also needs some help with his love life, having never been in a romantic relationship.

As I-hyeong’s soul resides inside those unfamiliar bodies, he eventually sets out to solve those people’s personal problems. A peculiar high school girl Skully, played by Kim You-jung, also sits by I-hyeong to help him out on this grand love mission. 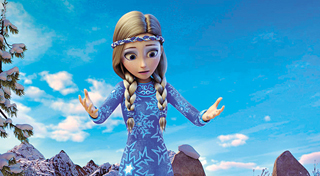 Many may be familiar with Queen Elsa from the Disney film “Frozen” (2013), but a few months before the release of “Frozen” was “The Snow Queen” (2012) by Russia’s Wizart Animation, featuring the female protagonist Gerda.

The third film of the movie series, “The Snow Queen 3: Fire and Ice” highlights Gerda’s mission to find the “wishing stone,” which has the power to cause trouble for the whole city. To keep the village from falling into chaos, Gerda sets out with her friends and heads to the cave where the stone is kept.

When Gerda arrives at the cave, however, she happens to awaken the Snow Queen, who is best kept deep asleep. Not only that, she also revives the King of Fire, leading to a fight between snow and fire.

Will Gerda be able to end the chaos and bring back peace?

The film is being released worldwide simultaneously in Russia, South Korea, Estonia, Lithuania, Latvia, Poland, Romania, Bulgaria, Cyprus, the United Arab Emirates and Turkey, among others.

James Bowen, played by Luke Treadaway, is a busking musician who doesn’t have any hopes or future. He feels like he’s losing more and more courage as time goes by, and getting by each day is as painful as ever. Into the bleak life of this man enters an injured street cat named Bob, who walks into James’ house one day. Feeling empathy for Bob, James uses most of his leftover money to save the creature, and heads to the streets to play music just like any other day. Today, however, the atmosphere around his crowd is somewhat different. Bob had found his way back to James and kept him company while James was busking. Thanks to the cat, James immerses himself in the warm cheers for the first time, and as Bob becomes a bigger part of his life, James feels as though he found meaning in his hopeless days for the first time in a very long time. But as nothing comes easy for anyone, another problem awaits James even when he’s finally gaining some hope.

This film is based on a true story that happened in 2007. Most impressively, the cat Bob from the actual story appears as himself in the movie. 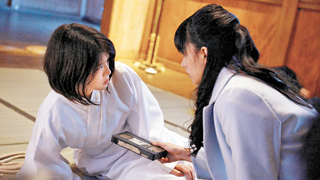 We’ve seen many films in which two heroes appear together, but not two ghosts. The devils from two famed Japanese horror flicks “Juon,” which features the devil Sadako, and “The Ring,” which centers on Kayako, will face each other in a legendary fight.

Yuri, played by Yamamoto Mizuki, runs into an old video tape by chance and watches it out of curiosity. Watching the video, however, puts viewers under a curse that kills them after two days. Meanwhile, Suzuka, played by Tina Tamashiro, has been suffering from consecutive nightmares since she moved to a new village. One day, while walking around her neighborhood, a strange house bewitchingly lures Tina to take a step inside. As she walks in, all Tina encounters is nothing but a revengeful spirit that resides in the house.

Horrified, Yuri and Tina both go visit exorcist Keizo, played by Masanobu Ando, to seek for help. Ando comes up with a plan to battle the two evil spirits, but will this be enough to free the girls from the vicious forces, or will it bring about even bigger terror?

Rudolf The Black Cat (All)

House cat Rudolf has always been curious about the outside world. When his owner takes her eyes off of him, Rudolf dashes out the door in search of a new adventure. After the cat jumps onto a truck, however, his journey becomes a longer one than intended, as the car takes him 388 kilometers (241 miles) away from home.

In the middle of an unknown village, Rudolf thankfully runs into an intelligent stray cat and his friends. The stray cat has a great deal of interesting knowledge and can even read books. Simply sticking around the stray cat keeps Rudolf highly fascinated, since he unveils a new world that Rudolf has never known of. However, this isn’t enough to keep Rudolf’s mind off his warm home. Desperate to return home and see his owners again, Rudolf plans a grand journey back with the help of his warmhearted friends. 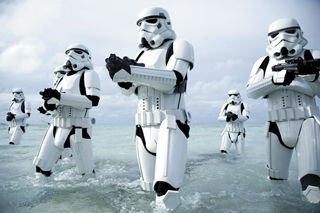 In a universe that has lost hope, Jyn Erso, played by Felicity Jones, undertakes the mission of stealing the plans to the Death Star, an ultimate weapon created by the Dark Side that is reaching completion. The Death Star is expected to hold unimaginable power, which may even lead to the collapse of whole worlds.

The possibility of leading a successful mission, however, is only 2.4 percent. With the help of Captain Cassian Andor (Diego Luna), Chirrut Imwe (Donnie Yen), Baze Malbus (Jiang Wen), Bodhi Rook (Riz Ahmed) and K-2SO (Alan Tudyk), Jyn sets out on the most secretive yet dangerous mission to bring an end to this destructive war.

Lead actor Felicity Jones is a rising British movie star, also having appeared as the protagonist in the recent film “Inferno.”

The movie is part of the Star Wars universe and takes place immediately before the fourth film in the series, “Star Wars: Episode IV - A New Hope.”