The ‘Shark’ is coming

The ‘Shark’ is coming 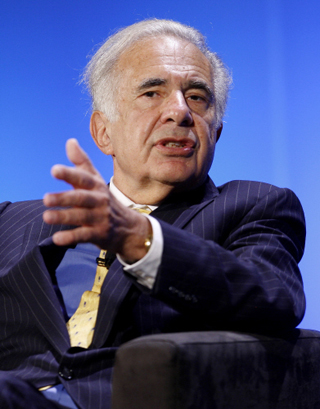 It’s like an aftereffect to apply the Choi Soon-sil case to everything. Last week, the U.S. version of Choi Soon-sil emerged. U.S. President-elect Donald J. Trump named Carl Icahn as Special Advisor to the President on Regulatory Reform. Icahn is known as a corporate raider, and his prey includes TWA, Texaco, Time Warner, Motorola and Yahoo.

The octogenarian investor is the architect of Trumponomics. The U.S. media heralded that Icahn had recommended treasury and commerce ministers. He does not have any ministerial position. Instead, he is more of a personal advisor to the president. Trump insisted that the position is not an official government position and he won’t get paid with taxpayers’ money.

Yet, the U.S. media is deeply concerned. Upon Trump’s election victory, the stock price of CVR Energy, an oil refiner in which Icahn owns the controlling stake, surged. The obstacle to its profitability had been the environmental regulations of the Environmental Protection Agency (EPA). Scott Pruitt, Trump’s pick to head the EPA, is against regulations. The Wall Street Journal expressed concerns that Icahn’s personal interests as an investor would collide with the public interests of an advisor. He invests in insurance company AIG, railcar company ARI and nutritional supplements company Herbalife, which are all involved in regulatory and supervisory issues.

Trump and Icahn share a similar business style. Trump meddled with stock prices via Twitter, after a tweet that emphasized nuclear capabilities made stock prices in uranium miners surge. It is the same tactic that Icahn used three years ago. When Icahn tweeted that Apple stock price was undervalued, the stock immediately went up by 5 percent, which translated into $20 billion. The two even had a partnership in the casino business.

In short, Trump and Icahn have maintained an economic alliance for over two decades. Icahn influenced in ministerial appointments. It is likely that he would continue to affect Trump’s decisions. But Icahn is outside of the government. Of course, Icahn would not engage in the illegal activities that Choi Soon-sil has done, and the background mastermind is not necessarily evil.

What matters is competency. Icahn is a business master. When he smells money, he would find weakness and get the result he wants through negotiation. In the statement appointing Icahn as his advisor, Trump called him “brilliant negotiator.” Korea has already experienced how fierce this negotiator is. In 2006, Icahn preyed on KT&G and left with 150 billion won ($124 million).

Once again, Korea faces the crisis of being preyed upon. Some officials feel strangely relieved as the market remains unaffected after Trump’s election. But Icahn may have already sensed the slack attitude. Whether Icahn becomes Trump’s Choi Soon-sil is a secondary concern. What we must remember is that when the celebration of Trump’s election was held, when his supporters were drinking champagne, the one who quietly left the party and invested $1 billion in derivative products that would make money when the stock price goes up was Carl Icahn, whose nickname is “Shark.”


*The author is a digital news reporter of the JoongAng Ilbo.