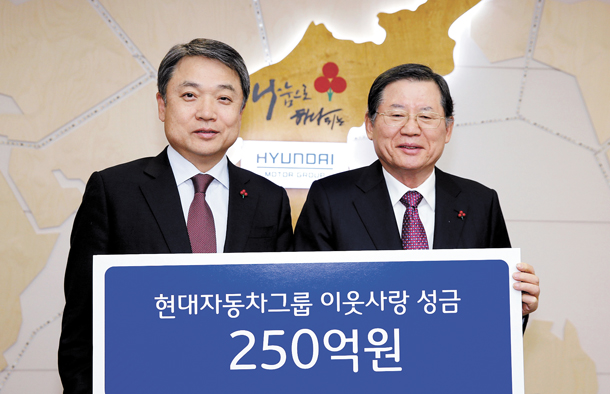 Despite a sagging economy and an ongoing probe into conglomerates’ role in the scandal involving President Park Geun-hye, Korean chaebol remained generous with yearend charitable giving.

The Community Chest of Korea, which raises funds for the underprivileged, said Thursday that Hyundai Motor Group gave the charity 25 billion won. The fund will be used to beef up disaster prevention and transportation safety as well as support students from low-income families with excellent academic achievements. Hyundai has contributed 209 billion won to the Community Chest of Korea since 2003.

The announcement by Hyundai, the nation’s top auto manufacturer, was preceded by an array of chaebol donations.

Samsung gave 50 billion won (41.4 million) to the Community Chest on Dec. 21, the same amount it has given for five years. Samsung began contributing to the social welfare organization in 1999, when it gave 10 billion won. The amount of yearly donation has increased over time, totaling 370 billion as of this year.

Insiders at Samsung said Lee Jae-yong, the company’s de facto commander in chief and Samsung Electronics Vice Chairman, told employees that social charity should not be reduced, adding that contributions should be administered on a transparent basis.

Huh Chang-soo, chairman of the troubled business lobbying group Federation of Korean Industries and GS Group, said earlier that that corporate sector should not stop assisting the needy, regardless of economic difficulties.

The charity has kept the tradition of installing a gigantic “thermometer of love” at Gwanghwamun Square in central Seoul every winter to show how much it has received and encourage more citizens to participate. Every time 1 percent of the donation goal for the year -- 358.8 billion won -- is collected, the temperature goes up 1 degree on a 100-degree scale.

As of Friday, the temperature registered 61.9 degrees, lower than 72 degrees seen a year ago, which indicates the thermometer needs more attention, according to the charity’s spokesman - even though fund-raising still has a month to go.