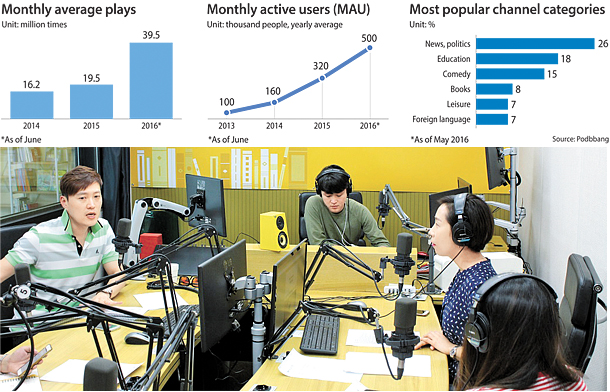 “We won’t be taking home any money for at least a year,” said journalists Lee Kook-myung and Park Sung-hoon to their wives when they decided to turn podcasting into a career last year. Their economic podcast series, “Economic Briefing: The Uncomfortable Truth,” had been going on for a year when they both left their posts at Seoul Metro.

“In fact,” said Lee, “we didn’t think we’d earn money for the first two years because nobody was making money out of podcasts then. For us, it was more a challenge than a business.”

The first earnings came only three months later, from listeners’ donations and advertisements. The account they had set up on a crowdfunding site raised over 16 million won ($13,236) from over 1,500 people over the last 16 months.

Podcasting was once considered a do-it-yourself pastime for which hosts record, edit and upload audio files online for pure fun. But now, it is growing into an industry of its own from which companies and hosts are making good money.

The leading company in Korea’s podcast scene is Podbbang, which provides an online and mobile platform where users can upload or listen to podcast episodes.

Launched in 2012, Podbbang serves about 70 percent of Korea’s podcast listeners. Twenty percent of listeners go to iTunes and the remaining 10 percent is divided among other foreign services. Podbbang alone has over 2 million subscribers.

The main source of revenue is audio advertising inserted before, between or after podcast episodes. Podbbang has two models.

One method is to insert audio ads as part of the episode into a single audio file. Advertisers either contact the host directly or go to Podbbang, asking to be connected with podcasts that are likely to reach their consumer targets. In return, the company takes 30 percent of the ad revenue as a commission fee.

The other method, introduced this month, is the use of pre-roll ads. With the host’s approval, a 30-second long audio ad is played before an episode. Listeners can choose to skip after the first ten seconds. If listeners stay on for 15 seconds or more, hosts and Podbbang split the money they receive fifty-fifty.

This system gives hosts a chance to gain money even if they are not popular. While advertising currently takes up half of all sales, Podbbang expects this ratio, along with all podcast sales, to expand much faster starting next year.

“This was our first year to promote Podbbang as an advertising medium,” said Kim Dong-hee, the business manager and one of the company’s founders. “Before, the focus was on enlarging the industry itself.”

Podcasting’s strength as an advertising platform lies in precise targeting. The platform is currently home to over 8,000 active podcasts, with a variety of subjects. In the movie category alone, there are channels that specialize in horror movies, while there are others that only deal with romance or animation films.

“Podcast ads can be pretty accurate in terms of reaching targets,” said Lee Jeong-ki, a researcher for media studies at Hanyang University, “because demographic features of listeners, such as age and gender, or even qualitative properties like one’s political stance or fields of interest, can be easily discerned by the podcasts they listen to.”

Media Zamong is another company rising as a competent service provider for hosts.

Unlike Podbbang, whose main focus is providing a platform rather than production, Zamong’s strength is in its ability to offer hands-on assistance in making, editing and publicizing podcasts. Its main source of revenue is a 1.5 million won fee which it charges for the whole package. Zamong’s CEO, Kim Kun-woo, has work experience in both broadcasting and marketing PR.

“Zamong’s ultimate goal is to be a media company that does both audio and visual,” Kim said, “but I started off with podcasts first because there was nobody else doing this kind of work at that time and podcasts were cheaper and easier to learn, and so more accessible to ordinary people than visual media.”

Amateur podcast hosts, who mainly start for fun, are another group starting to make money.

This is understandable considering the number of people they reach. The twenty most popular podcasts on Podbbang have 11,000 up to 234,000 subscribers. According to the company, top podcasts hosts receive advertising sales of up to several million won per month.

Hosts who become popular may gain access to sources of revenue other than ads, such as publishing.

Some also receive donations or crowdfunding from listeners, as mentioned in the case of “Economy Briefing.”

Comedian Kim Sook reached a career high point in the mid-2000s, but was not making many media appearance in the 2010s. To make use of her free time, she started a podcast last year on Podbbang with her colleague Song Eun-yi.

On the podcast, they give listeners advice. The series became such a huge success that it led to Kim Sook’s return to television as a regular cast in multiple programs. For celebrities like Kim, podcasting can be a way to gain fame among members of younger generations.

Few predicted podcasts would grow into something bigger than a cultural trend. Their popularity in Korea started in 2012, with the boom of “Naneun Ggomsuda” (“I’m a Petty-Minded Creep”), an infamous political podcast series that started just a few months before the presidential election.

This particular program inspired the creation of many spin-offs, which formed the first crowd of podcasts in Korea. Back then, many people predicted the wave would fade once the election was over.

But podcast eventually branched out to many other realms, such as books, movies, entertainment and education. This, in turn, widened the demographic of users. Although politics still accounts for 26 percent of Podbbang’s podcasts, those related to educational content and comedy have become important sectors, as well, and take up 18 and 15 percent.

Some still question how long podcasts will be able to survive in an era dominated by visual media. Its traditional counterpart, radio, has lost many listeners over the last few decades.

The answer may be found in data from the United States, where podcast culture is ten years older than in Korea. The Infinite Dial, an annual report released by Edison Research and Triton Digital, said in its 2016 report that the number of podcast listeners has reached almost 100 million in the United States, making it a “mainstream” medium.

Optimists say public demand for audio content will never completely disappear, because it is the easiest source of information to use while doing something else, such as driving, cleaning or exercising.

“The question is how audio content will evolve to meet the public’s changing needs,” said Kim Dong-hee of Podbbang, “and in that perspective, podcasts have an advantage because they are free in form, content and legal rules, making them more adjustable to trends.”

Some see potential as a platform in which individuals produce and upload entertaining content or information on their own channels. In this sense, one counterpart would be visual platforms such as YouTube or Afreeca TV.

“The difference between podcasts and visual-media competitors is that many people use it as a source of serious information, including journalism,” said researcher Lee at Hanyang University, “as opposed to Afreeca TV, where a majority of content is made for pure entertainment.”

The simplicity and low-entrance barrier of podcasting are attractive elements, said Professor Hong Sook-yeong of media and communication arts at Hansei University.

“Compared to visual media,” she noted, “podcasts require less professional knowledge and time to record and edit, not to mention they are cheaper.”