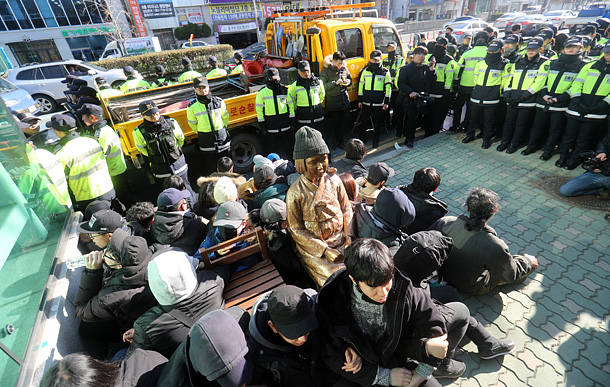 Members of a local civic organization and college students are surrounded by police as they stage a sit-in to protect a bronze statue representing “comfort women” victims Wednesday that they installed on a sidewalk behind the Japanese consulate in Busan. Thirteen of the activists were rounded up by police later that afternoon. Police removed the monument funded with public donations and took it to the district office. [YONHAP]

A civic group attempted to install a monument to victims of Japan’s wartime sexual slavery behind the Japanese consulate in Busan Wednesday but was blocked by the district office. Police rounded up 13 protesters amid a scuffle.

In a surprise maneuver, some 40 civic activists tried to erect a comfort women monument around five meters (16.4 feet) in front of the back gate of the Japanese consulate in Dong District at 12:40 p.m. on Wednesday.

This bronze statue of a young girl in hanbok seated on a bench, similar to the Peace Monument across from the Japanese Embassy in central Seoul, was made by a local civic organization, the Committee of Youth for Erecting a Peace Monument, also known as Youth Make Peace, and paid for by donations from the local community. Its installation was meant to coincide with the one-year anniversary of the agreement between Seoul and Tokyo to resolve the issue of the Japanese military’s forced recruitment of women into sexual slavery during World War II on Dec. 28, 2015.

The group had not received authorization from the district to install the monument.

Police tried to block the installation of the statue, saying it interfered with sidewalk safety laws, leading to a scuffle with the activists.

Authorities removed the statue at around 5 p.m. with a forklift and drove off with it on the back of a truck to the Dong District Office.

In the process, 13 of the protesters were rounded up by Busan police.

There are 55 comfort women statues in Korea and 15 overseas. This was the first time a district office blocked the installation of a comfort women monument.

Busan police released two of the 13 protesters on Thursday, but the remaining university students and civic organization activists remained in confinement. They exercised their right to remain silent.

A 59-year-old minister surnamed Park and a 41-year-old civic activist surnamed Cha were released at around 11 a.m., according to police.

Other activists camped out in tents 100 meters away from the consulate, braving subzero temperatures.

The protesters have not seen the statue since it was hauled away.

“We are not even able to confirm if the statue is being stored at the district office,” Kim Yoo-lan, a spokesperson for Youth Make Peace, told the Korea JoongAng Daily Thursday after a meeting with the district office to demand the return of the statue. “Since they are so staunch on abiding by the law, they need to tell us how we can get it returned and whether we need to pay a fine. But they are not telling us how to get back the statue and we will take legal steps if necessary.”

She continued, “It is a double-standard and an act that goes against the flow of history and also public sentiment.”

“Many people collected funds and cheered for the installation of the statue,” said Kim. “The statue was built to heal the scars of the comfort women victims, and also in protest of the government’s comfort women agreement last year. That is the reason why we wanted to install the statue near the Japanese consulate. The refusal by the Dong District Office can completely be seen as a political decision.”

The monument was financed by 8.5 million won ($7,060) in individual donations, including elementary school students pitching in their allowances.

The civic organization planned to install the comfort women monument Wednesday and hold an unveiling ceremony Saturday. Although it has no monument to unveil on Saturday, it will still hold a rally in front of the Japanese consulate, concurrent with the weekly candlelight vigils that are happening nationwide to demand President Park Geun-hye resign.

The Korean and Japanese foreign ministries struck a “final and irreversible” agreement on Dec. 28, 2015, to resolve the comfort women issue, which included an apology from the Japanese prime minister and a plan to establish a 1 billion yen ($8.53 million) fund for the victims, to be taken from Japan’s state budget.

However, some victims and civil activists have protested the agreement, demanding that the Japanese government take clearer legal responsibility. They have also rejected Tokyo’s demands that the comfort women statue across from the Japanese Embassy in central Seoul be removed.

The Korean government has maintained that the issue of the removal of the statue is a decision to be made by the civic organization that installed it.