Inflation low, but for some food

Inflation low, but for some food 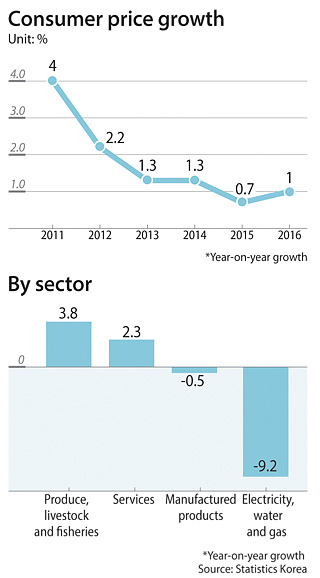 Although overall consumer prices rose by 1 percent this year, an aviation influenza epidemic has raised the prices of eggs significantly.

While incomes remained flat and the economy is facing myriad challenges, the government expects rising crude oil prices will raise overall inflation to 1.6 percent next year.

Although this is below the central bank’s target range of 2 percent, Koreans in middle and low-income households are expected to feel the pinch.

According to Statistics Korea Friday, consumer prices rose 1 percent this year after hitting a record low of 0.7 percent the previous year.

But prices of food, including produce, livestock and fishery products, rose 3.8 percent year on year and prices of fresh produce jumped 6.5 percent. The 6.5 percent increase was the highest since 2010, when such prices rose 21.3 percent. The statistics agency said the main culprits were vegetables, which saw price increases of 17.2 percent.

“The prices of produce, including vegetables, rose compared to the previous year due to the abnormally cold temperature in the beginning of the year and the heat wave that hit the country during the summer,” said Yoo Soo-young, a director at the Ministry of Strategy and Finance.

Even though the price of eggs dropped 8.5 percent this year from a year ago, the data for December showed a 6.9 percent rise when compared to last December. The statistics agency calculates inflation by collecting data three times a month to come up with an average figure.

“We are aware of the recent price hike in some agricultural products and will try to stabilize the prices ahead of the Lunar New Year holiday,” said Yoo.

Service prices, including rent, utility bills, travel and dining, in 2016 increased 2.3 percent year on year, contributing to raising overall inflation by 1.24 percentage points. The cost of rent, including jeonse, or lump-sum rental deposits, was up 1.9 percent compared to the previous year.

The low inflation this year was mainly due to the fall in international crude oil prices.

Prices for electricity, water and gas fell 9.2 percent in 2016 compared to the previous year, contributing to lowering inflation by 0.41 percentage points.

“The government’s decision to give discounts on household electric bills from July to September helped the price of electricity decline in general,” said Yoo.

Consumer prices rose the most on the southern island of Jeju, by 1.3 percent, followed by Seoul and Busan at 1.2 percent. Inflation was lowest in Gumi, North Gyeongsang, which saw prices rise 0.2 percent this year.

Meanwhile, the inflation rate of 1 percent recorded this year was the third lowest in history. The lowest rate was last year, followed by 1999, when it recorded 0.8 percent.