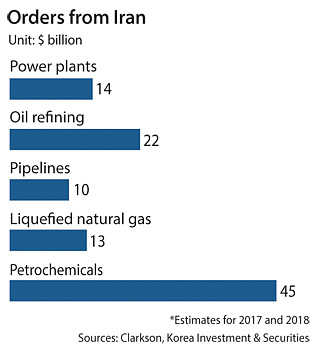 Iran, since the lifting of economic sanctions earlier this year, has become an increasingly attractive market for Korean heavy industry businesses, especially the construction and shipbuilding industries that have been targets of corporate restructuring in recent years.

Daelim, a Korean construction company, inked more than 2 trillion won ($1.66 billion) in orders in Iran on Thursday, while Daewoo Shipbuilding and Marine Engineering (DSME) entered a non-binding agreement to join a shipyard construction project there on Tuesday. Earlier in the month, Hyundai Heavy Industries signed a $700 million deal with Islamic Republic of Iran Shipping Lines to build 10 vessels.

According to Daelim on Thursday, it signed a 2.3 trillion won exclusive agreement with Iran’s Esfahan Oil Refining Company to renovate its oil refinery. The deal is the largest in Iran to date for a local construction company.

The project aims to add new facilities at the oil refinery in Esfahan, about 400 kilometers (249 miles) south of the country’s capital of Tehran, and enable production of high-value-added products there. Daelim will lead the construction process from plant design to materials procurement, construction and financing. With signing of the main contract scheduled for January, the project is due to take 48 months after breaking ground.

The core contributor for Daelim’s jackpot, according to the company, is the strong trust built between the company and Iran over the years. Daelim was the first Korean company to start a construction business in Iran. The first project was to carry out engineering work for Esfahan’s military facilities in May 1975. In the last 40 years, Daelim has secured 26 projects worth $4.55 billion.

“Daelim is the only company that did not pull out of the country during the war of Iran and Iraq and also during the period of economic sanctions from the West,” said Bae Seon-yong, an executive from Daelim. “Based on such relationship, we have been recognized by Iran’s state-run and private companies as a trustworthy company to do business.”

DSME also signed an agreement with the Industrial Development and Renovation Organization of Iran for mutual cooperation on developing an Iranian shipyard on Thursday. IDRO is a state-owned enterprise associated with Iran’s Ministry of Industries and Mines and a major shareholder for key industries in the country, including automobiles and shipbuilding.

“IDRO has been seeking a partner having advanced technologies and experience in order to build vessels for fleet expansion of Iran’s shipping companies,” DSME said in a statement Thursday. “The Iranian government said they will strongly support to succeed in this business cooperation, and request for Korean government and DSME to [provide] support on various sectors including financing and providing material package.”

The current deluge from Iran, which is easing the drought in orders for Korean companies, is expected to continue. Daelim is also processing construction projects to build the Bakhtiari Dam hydroelectric power plant and another contract to build a railway connecting Al Wajh and Esfahan.

Iran is seen as a market of opportunity for companies after economic sanctions were lifted in January. The country has abundant resources. It is ranked second in the world for natural gas reserves and fourth for crude reserves. Its geographical position is also advantageous for companies wanting to use Iran as a base for exports as it is surrounded by seven countries in the Middle East and Central Asia. As international oil prices are on the rise, Iran is expected to exploit its resources and use cash from oil to rebuild the country, which halted infrastructure development for more than 30 years.

After the Islamic Revolution of Iran in 1979, the country’s diplomatic relations with the United States had been cut. Then Iran began developing nuclear weapons which further led to a deteriorated relationship with other countries.

In 2000, U.S. President George W. Bush names Iran as part of the “axis of evil” and in 2007, imposed financial sanctions on the country. The succeeding Obama administration imposed sanctions on the Central Bank of Iran in 2011 while blocking trade with National Iranian Oil Company in 2012. Thus, Iran fell short of oil products such as gasoline despite its vast oil reserves as infrastructure development for oil refining lagged. Roads, ports and other basic infrastructure also had been underdeveloped.

“Iran, since establishing diplomatic ties with Korea in 1971, has been in a good relationship with Korea as much as to build roads named after each other’s capital city,” said Kim Seung-wook, head of a trade center based in Tehran, operated by Korea Trade-Investment Promotion Agency. “After the sanctions were lifted, there has been a growing demand in the country in sectors Korean companies are competitive in such as construction, oil refining and shipbuilding.”