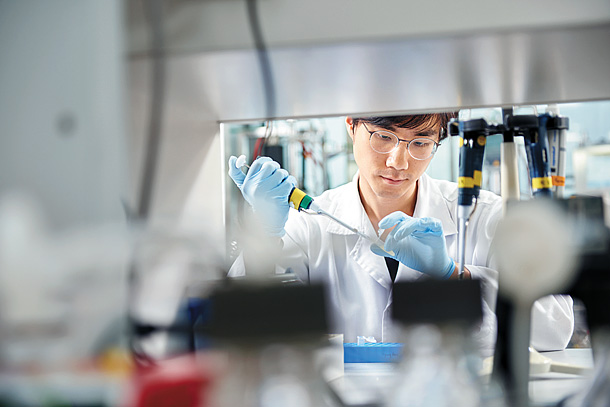 Developing new medicine is a high risk, high return task that needs to be done over the long term. [HANMI PHARMACEUTICAL]

Hanmi Pharmaceutical recently signed multiple license contracts for new medicine, causing a huge reevaluation in pharmaceutic-bio fields. The widespread interest on its accomplishment was largely focused on the figure of 8 trillion won ($6.66). Nevertheless, many argue that we need an accurate understanding of that number, since the contract between Hanmi and Boehringer Ingelheim was canceled in September.

To jump to the conclusion, 8 trillion won refers to the final amount Hanmi will receive after its new medicine pass three clinical trials and become commercialized.

Milestone-based contract refers to a contract between two companies based on the assumption that the project will succeed. However, the contract can be cancelled at any time depending on the circumstances, because development of a new medicine can be an opportunity as well as a risk.

Milestone-based contracts are comprised of three steps: a fixed deposit that is received at when the contract is signed, a down payment according to the achieved results, and royalties that will be received from the sales revenue after commercialization, according to the commission rate.

8 trillion won, which was reported last year as the achievement of Hanmi, includes those three steps. Hence, Hanmi will reach the milestone payment when the clinical development of the new medicine has made progress, as a form of a progress payment.

A recent study by the Korea Pharmaceutical Manufacturers Association has affirmed that the probability of developing new medicine from a set of candidate materials is only 0.02 percent. Although the total cost depends on the field of treatment, it usually takes about 12 years and one trillion won on average to develop a new medicine.

In other words, one out of 5,000 candidate materials make it to become a new drug, which can be said to be almost a miracle. Such rate is lower than the possibility of gold mine development (10 percent) and possibility of oil development (5 percent).

Considering the nature of “high risk, high return” in the pharmaceutical industry, it is widely argued that developing new medicine must be a long term project. “Failure is inevitable in the process of new medicine development, and success cannot be attained without failure,” said a staff member of Hanmi. “We will not be easily swayed by the innumerable variables in the clinical trials and will continue our pursuit of new medicine development.”

“Developing new medicine at a global level is difficult, and sometimes quite heart-breaking, and yet Hanmi pursues ‘new global medicine,’” said Lee Gwan-sun, the President of Hanmi Pharmaceutical, “Our company has always found opportunity in the most difficult times.” He also said, “We strive to benefit those who are in pain with diseases, and will contribute to the national growth power in the international pharmaceutical market, which reaches 1,400 trillion won.”