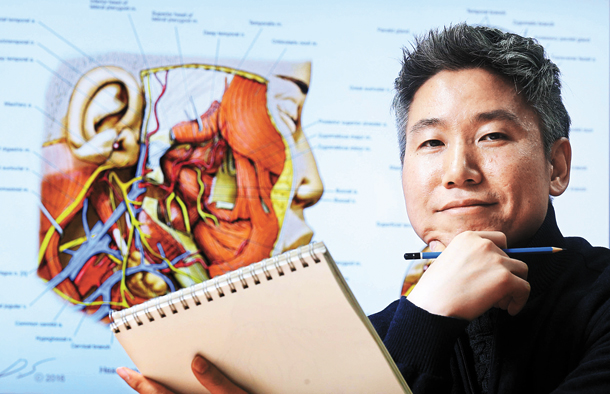 He woke up in the middle of the night, unaware that he had fallen asleep after work, to find his arms wrapped around a cadaver that his body heat had turned slightly warm.

“I must have been so heavy,” he murmured. “Sorry.” Then he reopened his drawing book.

As a medical illustrator, Jang Dong-soo has spent seven years studying the anatomy of cadavers in medical school, not to perform autopsies, but to work as a medical illustrator producing images typically used for medical text books, dissertation papers, conferences and patient education programs.

In a field of no more than 10 people in the whole country, Jang has been actively working for 15 years.

Based on his seven years of experience in the anatomy lab, the illustrator is currently running a design company called MID (Medical Illustrations & Design), while also specializing in graphics to be used for Yonsei University’s medical school research team. Jang’s images and graphics are used by hundreds of researchers in and out of Korea, as well as school textbooks.

Jang had majored in sculpture as a university student when he started to develop an interest in the realistic depiction of the human form. “I drew portraits of people and made busts as a part-time job,” he says.

Jang’s current career began in 2002 as a teaching assistant for Yonsei medical school’s anatomy class, a job he got by posting musculoskeletal pictures he had drawn in his university class. But by not starting out as a medical student, he had a hard time catching up with the class at first.

“For the first three years,” he says, “I spent two to three days in the lab by myself to make sketches of the specimens. I was under so much pressure to become a proper illustrator, that I didn’t even think it was scary.”

The essence of medical illustration, Jang notes, lies in precision and focus.

“Photographs would be better if you were looking for the most realistic depictions of a human organ or the brain,” he explains, “but illustrations are preferred because they more clearly highlight key information.”

One picture he drew in 2003, for example, shows how nerves spread out from the stylomastoid foramen, a rounded opening in the skull just below the ear.

“Back then,” Jang says, “not many pictures showed this structure clearly, and it was highly approved of by otolaryngologists and plastic surgeons. The work was done after I had observed each nerve with my eyes and hands.”

Besides his job as a medical illustrator, Jang is also an active sculptor. In November, Jang held an exhibition at Hongik University on the theme of medical art, in which he put on display a number of his works, including those depicting the human brain.

“Korean medicine is improving at a surprising speed and so the role of a medical illustrator is becoming more important,” said Jang. “I am planning on producing imagery work that’s easy to understand for people outside the medical world by using cartoons.”