Back to school more than 40 years later

Back to school more than 40 years later 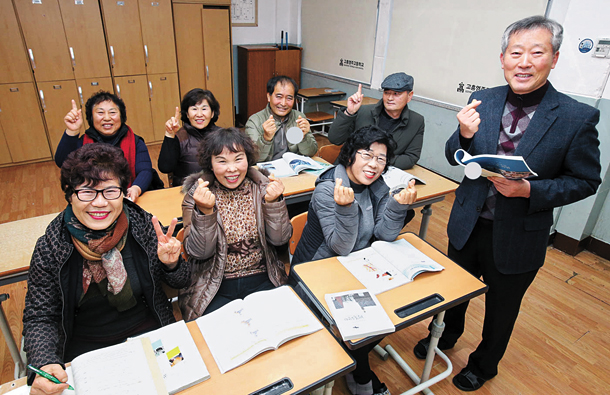 Late-learners in their 50s and 60s from the Goheung Lifelong Education Center in South Jeolla visited Goheung Youngju High School on Dec. 21, which they will attend starting in March. The students and Principal Lee Gang-seon (right) held a class rehearsal. The students had not sat in school desks since graduating from elementary school decades ago. [Chang Jeong-pil]

The future of Goheung Youngju High School in the rural town of Gwayeok in Goheung County, South Jeolla, was anything but promising.

The number of new students entering the school this coming March was less than 15 — the minimum required to be a recognized class.

Principal Lee Gang-seon, 59, and his teachers and staff feared the school, which opened in 1968, would be merged with another nearby school.

That’s happening a lot in Korea’s farming areas, abandoned by many of their young people for more interesting lives in the cities. At Goheung Youngju High School, the student body has gone from 102 in 2010 to 32. It doesn’t have a single student in the 11th grade.
Schools across the South Jeolla region are being consolidated. Since 2012, nine elementary schools, four middle schools, and 14 high schools were either consolidated or scheduled to be merged.

Last October, Goheung Youngju High got some good news. Ten students from the Goheung Lifelong Education Center for middle school equivalency were scheduled to graduate in February. The center specializes in adult education. The students were born from 1950 to 1963.
Principal Lee and his teachers hurried to the Goheung Lifelong Education Center to enroll a new 10th grade class. Those students would have an average age of 59.7. Two of the students are a married couple.

Lee gave a presentation about his school. Kim Dong-wol, 58, didn’t know whether he could handle going to school five days a week for three years. Lee’s presentation won him over and eight of the other students too. I thought, “Let’s properly study what we already started,” says Kim.

Word spread and another middle-aged resident of the town decided to join the class. Ten middle-aged people will join six teens — enough to constitute a class. The school was able to avert a crisis.

School starts in March and there are a few areas of concern. First of all, because the older students have occupations in fishing, farming and businesses, they may be absent regularly. No one knows how the older and younger students will get along — possibly the classroom ambience will be ruined.

And can people in their late 50s and early 60s really be forced to do homework?

On the plus side, older students are usually more serious about their studies. Every time Kim and other seniors met with the principal, they discussed the subjects they wanted to learn. They asked for subjects that would be helpful in their day-to-day lives.

The school decided to come up with tailor-made classes: conversational English for use in overseas travel, Korean to help read newspapers and books and computer classes to familiarize students with the internet. Kim and the other older students even insisted on wearing school uniforms.

From the school’s point of view, attendance was the most crucial issue. It decided to apply the same standard as for regular students.

More than 60 absences disqualify a student from passing the grade.

“If you have to farm after school, we will try to approve requests for early leaves as much as possible,” Lee told the new students.

“We have to farm peppers and onions and go fishing,” said husband and wife team Jeong Heung-sul, 65, and Seon Chun-bang, 56. “But we will attend school daily so as to not neglect our studies.”

According to Principal Lee: “The drive of the incoming students is impressive. I believe they will be a good influence on the regular students.”