Court: Park trial will be speedy

Court: Park trial will be speedy 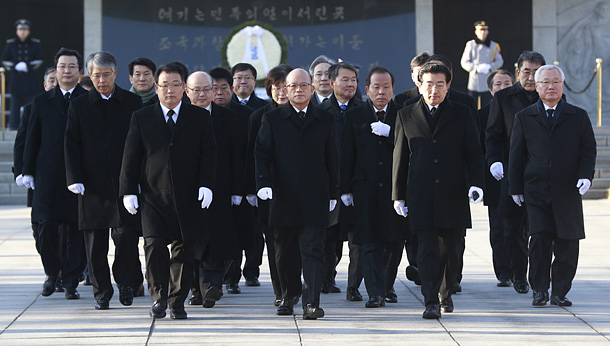 Justices of the Constitutional Court walk into the Seoul National Cemetery in Dongjak-dong, southern Seoul, on Friday to pay homage to the patriots who sacrificed their lives for the sake of the nation and were enshrined in the cemetery. Politicians and senior government officials usually visit the sanctuary when they make important decisions for the country. [YONHAP]

The top justice of the Constitutional Court promised Friday a “speedy and fair trial” on the impeachment of President Park Geun-hye, suggesting a verdict could come early next year.

The court released Friday a New Year’s address from Chief Justice Park Han-chul, whose tenure ends on Jan. 31, 2017. In the statement, Park promised a fair and speedy ruling that is convincing to the public. “I am very well aware of the grave significance of the impeachment trial in our constitutional order,” Park wrote, “and I feel heavy responsibility.”

On Dec. 9, 2016, the National Assembly passed a motion to impeach Park for having committed violations of the constitution and criminal laws by allowing a secret inner circle, including longtime friend Choi Soon-sil, to interfere in state affairs. It also accused Park of having failed to protect the lives of citizens due to nonfeasance during the sinking of the Sewol ferry on April 16, 2014. A total of 304 passengers died after a delayed government response.

In all, the National Assembly laid out five counts of constitutional violations and eight counts of criminal law violations. Concerns were initially high that the nine-member court may need to use most or all of the 180 days allotted to the trial because of the many charges.

Indications, however, are increasingly suggesting that the trial will proceed speedily. After two pretrial conferences earlier this month, sources from the Constitutional Court and legal experts forecast that the ruling could be made as early as February.

In its third and last pretrial conference Friday, the court stressed the need for speed.

“In order to resolve the vacuum in state affairs, the trial must proceed accurately and quickly,” Justice Kang Il-won said, asking for cooperation from the National Assembly’s impeachment committee and Park’s defense lawyers. Kang said an impeachment trial is different from an ordinary civil or criminal case, and the court will not wait for the outcomes of trials of Park’s associates.

Choi, Park’s friend, and a former Blue House aide are currently standing trial for coercing conglomerates to make massive donations and misappropriating the money. Another aide was accused of leaking confidential government information to Choi. Park was named a co-conspirator in all of the alleged crimes but prosecutors could not indict her due to presidential immunity.

At the three pretrial conferences this month, the court selected as witnesses Choi, An Chong-bum, former senior presidential secretary for policy coordination, and three former Blue House secretaries - Jeong Ho-seong, Lee Jae-man and Ahn Bong-geun - who earned the nickname “doorknobs” for their direct access to the president.

Two staffers who worked on Park’s personal affairs were also selected as witnesses.

The court also declined the impeachment committee’s demand to question President Park in the courtroom. It also warned Park’s lawyers to submit evidence of her specific whereabouts and actions during the crucial early hours of the Sewol ferry’s sinking as soon as possible. The court made that demand at the first pretrial conference on Dec. 22.

Without submissions, the court has to rely on records that the president has challenged in the past, Justice Kang warned. Park’s lawyers promised an answer by next Thursday.

The court also accepted Friday seven out of 16 requests by Park’s lawyers to verify the validity of evidences, indicating that it will not waste time in the process.

“The court is condensing the procedural parts of the trial,” said a court official. “Immediately after it received the investigation records from the prosecution, it filed them as evidence. This is an unusually speedy move.”

In its first pretrial conference on Dec. 22, Justice Kang said, “Concerns are high about the vacuum in state affairs because the president is suspended from working.” Han Sang-hie, a professor at Konkuk University Law School, said the remark indicated that the Constitutional Court sees the situation as a crisis of both the constitutional order and the country. Because the court exists to resolve such a crisis and protect the constitutional order, the judges will try the case quickly, he said.

At the second pretrial conference on Tuesday, Justice Kang also stressed the importance of the “merits of case,” not procedures, after President Park’s lawyers said the passage of the impeachment was legally flawed because it was passed without an investigation of the Legislation and Judiciary Committee. Kang’s remark showed that the court will not allow debates on procedures to delay the trial.

“In an ordinary trial, the prosecution’s indictments and investigation records are opinions that must be verified during the trial, but it can be different in an impeachment trial,” said a former Constitutional Court justice. “They can be treated as official documents created by a government institution and they can be selected as evidence without verifying the contents in a courtroom.”

The court received 32,000 pages of investigation reports from the prosecution, and the court has to select what will be admitted as evidence. The more it selects, the slower the trial will be.

Using the precedents of the Roh trial will allow the court to speed up its work, experts said. It took 63 days for the court to overturn the National Assembly’s impeachment of Roh.

Under the order, the impeachment committee’s evidence are logged separately from Park’s evidence. In a criminal trial, evidence is logged together, not separately.

“Although it may seem trivial, this shows the court’s intention to speedily try the case,” a legal expert said.

“The court is sending a message that it will use its discretion to select evidence and witnesses, just like in a civil case, instead of automatically following the complex procedures of a criminal trial,” said Noh Hee-bum, a lawyer and former researcher of the Constitutional Court.

It also shows that the court is using a different method in the impeachment trial from a criminal trial, which rules on a punishment on an individual. “An impeachment trial is not about ruling on one individual’s rights,” said Chang Young-soo, professor of law at Korea University. “This is about deciding on a dismissal from the presidential post.”

The court appeared to be accelerating its deliberation because tenures of two judges will soon end. Chief Justice Park’s term will end Jan. 31, 2017 and Justice Lee Jung-mi’s tenure ends March 13, 2017.

The court has nine judges, which reflects the separation of powers. Three are selected by the president, three by the National Assembly and three by the Supreme Court chief justice.

Legal experts, including the justices of the Constitutional Court, worry that the ruling on President Park’s impeachment will be made with a vacancy. “Taking into account the constitutional value of the nine-member panel, the ruling must be made without a single vacancy,” said Jeong Joo-Baek, professor at Chungnam National University Law School. “If it is not, it can be a flaw in history.”

Professor Shin Pyung of Kyungpook National University Law School said it is possible that Chief Justice Park will participate in the impeachment voting, if the final arguments are concluded in the courtroom before his tenure runs out. “But that will give less than a month for the trial, so the ruling’s fairness could be challenged,” he worried.