Justice is a dialogue

Justice is a dialogue 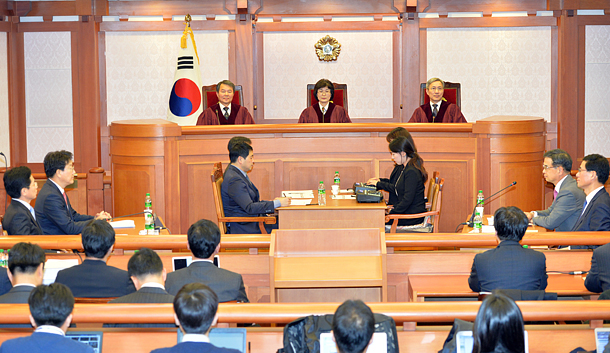 Judges at the Constitutional Court on Dec. 22 prepare for a pre-trial deliberation on the impeachment of President Park Geun-hye. [Joint Press Corps]

There is a rumor that Constitutional Court Chief Justice Park Han-chul wants to achieve a court ruling on the legitimacy of the legislative motion to impeach President Park Geun-hye before his term ends on Jan. 31. When asked to confirm this, a court official simply commented that Park does not meet anyone outside, suggesting he is entirely devoted to the deliberation. Another court official said Park has never sought to rush through trial proceedings to reach a conclusion before his time is up, but that the bench overall has agreed to speed up the procedure. That the court is entirely committed to the case appears to be clear.

The impeachment would become theoretically valid when six out of the nine justices agree. The ruling would be legal even without Park and Justice Lee Jung-mi, whose term ends on March 13. But what if two of the remaining seven oppose? At least eight should be present to make the ruling undisputable. I personally believe Park should see it through while in office.

There is not much time left. President Park’s side is persistently attempting to delay the procedures through their right of defense and concrete evidence. The Constitutional Court does not rule on guiltiness, but on Constitutional integrity. It therefore has room to be flexible on the six-month time limit.

I asked whether an impeachment trial is political. “Impeachment fundamentally has political connotation,” says Chon Jong-ik, a professor at Seoul National University Law School. The previous impeachment trial of former President Roh Moo-hyun concluded that a president should be impeached upon the “gravity” of the offense regardless of its legality. What offense then is “grave” enough to dethrone a sitting president?

It is a highly political and abstract concept that could be shaped by individual belief and the legal interpretation of the judges. “A trial must not have political consideration,” argues Lee In-ho, professor of Chung-Ang University Law School. I, too, believe the judiciary should be untouched by political influence or popular opinion.

I still remember the ruling by the Constitutional Court on Oct. 21, 2004. Then Chief Justice Yun Young-chul disallowed the government’s plan to establish a new administrative capital because Seoul was the capital of Korea under “customary Constitution.” It remains disputable why other capitals of dynasties over the Korea’s history of 5,000 years cannot stand as today’s capital.

The ruling has become the exemplary case of the judicialization of politics by arriving at a judgment through application of customary law due to lack of strong reasoning through statutory law. The Constitutional Court’s ruling to overthrow the legislative motion to impeach President Roh Moo-hyun, uphold a special law to seize the assets of pro-Japanese collaborators during colonial days and outlaw the Unified Progressive Party for the pursuit of North Korean ideology and attempts of rebellion are other case of judgments that went well beyond the judicial provision of the Court. The rulings were in line with the popular opinion of the time.

The judicialization of politics is justified when it reflects public sentiment.

The court evolves through communication and connection with the people. Sandra Day O’Connor, America’s first female associate justice of the Supreme Court, who retired in 2006, said, “dynamic dialogue” exists between the highest court and the people, and “if one looks at the history of the Court, country and the Constitution, the relationship appears to be more of a dialogue than a series of commands.” The judiciary and Constitution exist to serve the interests and thoughts of the public.

The nine Constitutional Court judges will face their biggest challenge during their bench career in 2017. Dismissing Park is a judgment that can reshape Korea’s fate and history. If the court discovered “gravity” on the grounds for her impeachment, it should not hesitate between judiciary and political judgments. The bench should come to a quick conclusion and remove the roots of unrest, irregularities and injustices and restore justice and order in Korea.