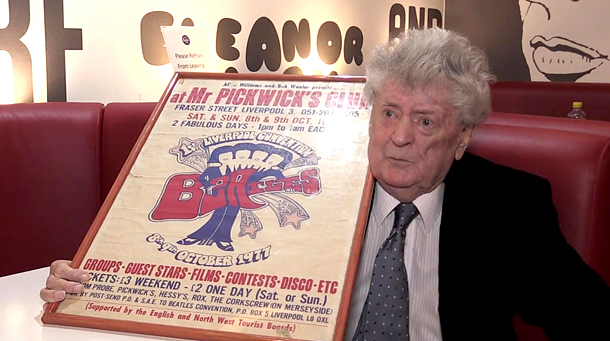 LONDON -Allan Williams, a fixture on the Liverpool music scene who gave the Beatles a place to practice and helped them get early gigs, has died. He was 86.

Graham Stanley, manager of the Jacaranda club that Williams used to own, said Saturday that Williams died Friday night. He did not have further details.

Williams, who opened the Jacaranda in 1958 in the early days of rock ’n’ roll, played an important role in finding club dates in Liverpool and in Hamburg, Germany, for the young Beatles. Stardom was still in the future for a band then known as the Silver Beatles.

Williams’ club also provided a training ground for many other up-and-coming Liverpool bands at a time when young British musicians inspired by American hit-makers were developing the sounds that would eventually fuel the British Invasion led by the Beatles and the Rolling Stones.

Williams believed in 1960 the Beatles had potential and let them practice at the Jacaranda - in exchange for putting them to work decorating the club’s basement, Stanley said.

At the time, the band played mainly cover versions of American rock ’n’ roll hits by masters like Chuck Berry. The songwriting skills of John Lennon and Paul McCartney had not yet surfaced.

Williams personally drove the band to Hamburg in a cramped van in 1960 for an extended series of nightclub shows that honed their stamina and live skills. He is sometimes described as their first manager.

The band eventually fell out with Williams and moved on to be managed by Brian Epstein, who helped clean up their scruffy image and get them a record deal after a series of rejections.

Martin King of The Beatles Story museum in Liverpool said Williams played a vital role shaping the youthful band. “His legacy will continue to be told for years to come,” said King.

He did not seem bitter about his relatively minor role, telling the Liverpool Echo in 2010 that he was “proud and happy to have been just a small cog in the wheel of the most famous group in the world.”

Williams’ 1976 book about the band’s early years is called “The Man Who Gave the Beatles Away.”