K-pop gets ready for its big night : The 31st Golden Disc Awards will honor the best music of the year

K-pop gets ready for its big night : The 31st Golden Disc Awards will honor the best music of the year 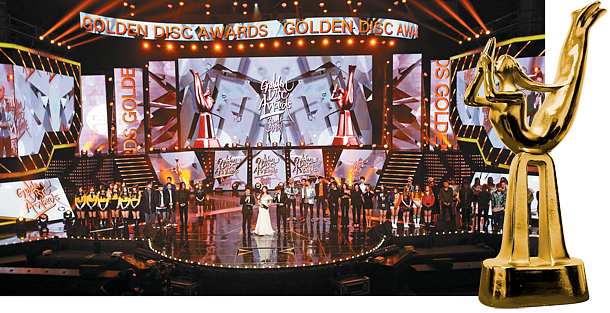 The 31st edition of the Golden Disc Awards will be held for two days from Jan. 13 at Kintex in Ilsan, Gyeonggi. The event will have many well-known K-pop stars who have brought Korean music to the world. [JOONGANG ILBO]

One of the biggest annual celebrations of K-pop music is only about two weeks away as the Golden Disc Awards, one of the largest pop music awards in Korea, happens for two days starting Jan. 13.

To celebrate the 31st edition of the show at Kintex in Ilsan, Gyeonggi, the organizer has confirmed big-name celebrities as hosts of the show, including singer and actor Jung Yong-hwa of boy band CN Blue and Girls’ Generation’s Seohyun for the first day of the awards, and actress Kang So-ra and singer and actor Sung Si-kyung on the second day, alongside many other K-pop stars. The hosts also play a key role in making the overall event more fun, so the organizer made sure to invite some hosting pros who have presented the awards before, like Jung and Seohyun.

The Golden Disc Awards will honor K-pop stars in three different categories: album, digital, and rookie artists. There are 30 nominees each for the physical album and digital divisions, while 12 are up to win the glory of becoming rookie of the year.

Out of all the divisions, many more of the popular boy and girl groups are up for the album awards than others. Nominees for those who sold the most albums are 2PM with its “Gentlemen’s Game,” B1A4 with “Good Timing,” B.A.P’s “Carnival,” and I.O.I’s “Chrysalis.” Those who were more popular in the digital media include Gary’s “Lonely Night,” 10cm’s “What the Spring?” and Park Hyo-shin’s “Breath.” The first day of the event will focus on singers who dominate the digital world while the second day will be more about singers standing out in album sales.

Gugudan, Blackpink, Snuper and more have made to put their names down for the rookie artist nominee’s list. Singer Jung Seung-hwan, who debuted after participating in the survival audition program “K-pop Star,” has also made it to the rookie’s list.

To include more fans as a part of the event, the awards is currently holding a poll to choose the most popular artist for the year. As of 5 p.m. Sunday, SHINee is shown to have taken 31.8 percent of all votes, while Kim Jae-joong is right behind with 31.4 percent of the votes. The poll will close on Jan. 12. The poll is on the award shows’ website.

The event, which started in 1986, has so far given its highest award to 24 different solo singers or groups.

Veteran singer Jo Yong-pil, boy group Super Junior and five others have won the award three times, the largest number of wins for individual singers or groups. The event launched the digital song division in 2006 as the industry started to shift from physical albums sales to downloading songs onto electronic devices.

The show will be broadcast live on JTBC for those looking to enjoy an up close look of the singers from the comfort of their couch. For more information about the concert and to participate in the poll to choose the most popular singer, go to http://isplus.live.joins.com/goldendisc. The website is offered in Korean, English and Chinese.