Throngs of Leias turn out in force to mourn Fisher

Throngs of Leias turn out in force to mourn Fisher 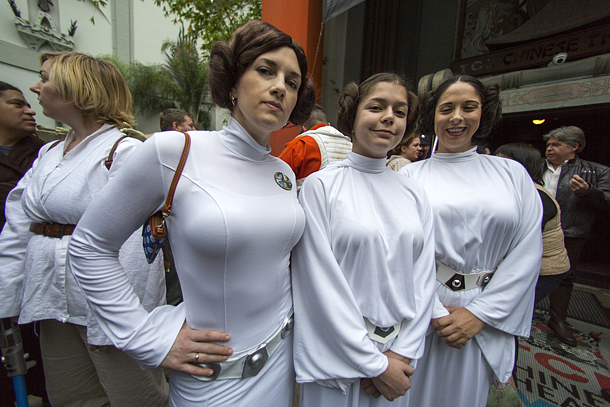 Fans dressed in honor of Carrie Fisher, famous for her iconic role as Princess Leia in the “Star Wars” movie series, gather for a memorial for the actress outside Grauman’s Chinese Theatre on Saturday. “Star Wars” premiered at Grauman’s in Los Angeles in 1977. [AP/YONHAP]

NEW ORLEANS - Their hair wrapped in side buns, wielding lightsabers and dressed as everything from Wookiees to stormtroopers, thousands of people turned out to honor Carrie Fisher, the actress famous for her iconic role as Princess Leia in the “Star Wars” movies.

Fisher, whose tough-talking princess defied Empire generals while tossing off one-liners like “into the garbage chute, flyboy,” died Dec. 27.

In New Orleans, where death is marked by both mourning and merriment, the Intergalactic Krewe of Chewbacchus organized a parade Friday in honor of the woman they consider royalty.

“This is a public demonstration of our love for Princess Leia,” said Brooke Ethridge, one of the founders of the Leijorettes, a dancing group of fans who dress like Princess Leia. “Our first instinct was to hit the streets and parade and celebrate Princess Leia and Carrie Fisher.”

Chewbacchus is dedicated to all things sci-fi and fantasy-related and has always drawn inspiration from the “Star Wars” movies. The group’s logo features the head of Chewbacca, the furry Wookiee who was Han Solo’s close friend and co-pilot.

Fisher had been hospitalized since Dec. 23 after falling ill on a flight and being treated at the Los Angeles airport. One day after Fisher’s death, her actress mother, 84-year-old Debbie Reynolds, also died.

Reynolds’ son Todd Fisher said the mother and daughter will be buried together. He said the actresses will be interred at Forest Lawn-Hollywood Hills in Los Angeles, the final resting place of numerous celebrities, including Lucille Ball, Liberace, Florence Henderson, David Carradine and Bette Davis. A public memorial is being contemplated.

“I didn’t know her. But as an iconic character and as a person, a writer and a smart funny fantastic woman and role model, I was heartbroken and devastated,” Dale Hrebrik said.

But even in a crowd where Fisher’s Princess Leia role was front and center, many pointed out the contributions Fisher made outside of “Star Wars.” One marcher held a sign calling Fisher, who spoke openly about her struggles with bipolar disorder, a mental health advocate.

Jacquelyn Ryan’s hair was wrapped in two side buns, but Ryan said she was more impressed with Fisher’s other contributions. “Her activism, her mental health awareness, her activism for women, her unapologetic attitude about youth and beauty in Hollywood really spoke to me,” Ryan said. AP