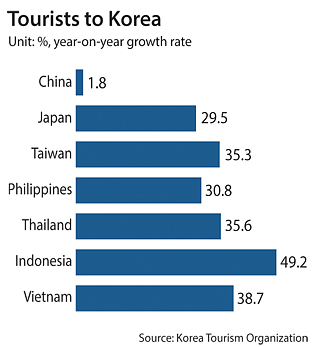 “I don’t think the situation will get any better this year,” the director said. The duty-free company saw its customers decrease by at least 10 percent in December compared to the same period last year.

This year will be tough for Korea’s tourism industry as a whole as more youke, or Chinese tourists, are turning their backs to what was until recently one of their favorite destinations.

The main cause is geopolitical. After Korea decided to deploy an American Terminal High Altitude Area Defense system (Thaad) missile defense system, Beijing ordered retaliation against a range of Korean businesses, particularly its entertainment exports. The Chinese government denies issuing vindictive orders to reduce tourists to Korea by 20 percent, but the numbers tell a different story.

Mismanagement of Chinese group tours, such as forcing them to buy merchandise, is another factor.

In November, the number of Chinese tourists coming to Korea was 520,000, a mere 1.8 percent increase year on year, according to the Korea Tourism Organization. The growth rate in August was 70.2 percent - partly due to a base effect related to the low number in August 2015 during an outbreak of Middle East respiratory syndrome. This dropped to 22.8 percent in September and 4.7 percent in October.

For the first time in three years, the rate of Chinese tourists to all tourists in Korea fell below 40 percent to 39.5.

One internal problem in Korea’s industry is group tours that overly emphasize shopping. The tour groups get commissions from the merchants.

Ms. Wong, a 32-year-old office worker, was hauled to six shopping places in a single day as part of a five-day group tour to Korea in November. The guide informed the group that the stores were certified by the government, adding that all the salesperson were public officials.

“I really doubted whether any of the stores I visited today were approved by the government,” she said. “I’ve never heard of the brands before and yet the products were all so expensive.”

Government approval of stores does exist - a system jointly operated by the Korea Tourism Organization and the Ministry of Culture, Sports and Tourism. Three of the six stores Wang went to were not among the 1,004 certified stores. The other three were well-known duty-free stores.

“There is no case whatsoever in which a public official works as a sales person at a commercial store,” confirmed a KTO spokesman.

To tackle the problems with group tours, the Korean and Chinese governments have started to launch regulation on the business.

According to local industry insiders, China’s tourism companies, who organize and send tourists to Korea, have increasingly made demands such as requesting lower fees from the Korean side or charging incentives per person in exchange for sending groups.

“I heard of one case in which a Chinese travel agency asked for 300 yuan ($43) per person,” said a source working for a domestic travel company.

Because the local tourism industry depends so heavily on Chinese tourists, local companies find it hard to resist such requests.

To make up for those concessions, local tour companies try increasing their revenue by taking groups to duty free shops, where they get commissions.

After the government issued new duty-free licenses in Seoul, competition among the stores got fiercer.

“About 10 to 20 percent of sales are given to travel companies as commissions when their customers spend money at our branches, but after the competition heated up, I heard some even started paying up to 30 percent,” said one source.

That’s causing a kind of race to the bottom in terms of profitability. “The competition has gotten so cut-throat,” said another duty free source, “that even with rising sales, profits are constantly going down.”

Tourism specialists say Korea’s tourism industry has to reduce its dependence on China and shopping.

They emphasize the importance of enhancing the cultural experiences for visitors.

Lee Sho wen, 52, and Lee Li Mei, 47, sisters from Taiwan, spent two of their six days in Korea at a cooking class they found on the internet. The OME Cooking Class has provided Korean cooking classes in English and Chinese for foreigners since March 2015.

Ha Wong Ming, a 27-year-old from Hong Kong, came to Korea for four days to learn K-pop dancing. He practiced the choreography of Big Bang’s “Bang Bang Bang” for two hours at Coreart, which organizes classes in K-pop dance and samulnori, a traditional percussion performance. “The objective is to offer a chance to experience Korean culture,” said CEO Jee Yoon-seong.

“Shopping tourism has a limit,” said Lee Ki-Jong, a professor of hospitality and tourism management at Kyung Hee University. “Korea is relatively short of natural scenery so we have to focus more on cultural tourism.”

In terms of diversifying target markets, a rising alternative to Chinese is Southeast Asians, many of whom are already familiar with Korean culture from hallyu, or the so-called Korean wave of cultural exports like K-pop and television serials.

The number of Indonesian tourists to Korea November jumped 49.2 percent from 2015, according to the Korea Tourism Organization. Visitors from Vietnam rose 38.7 percent and from Taiwan 35.3 percent during the same period.

Widening the spectrum of visitors can open new opportunities. For example, Taiwanese tourists have a keen interest in visiting Korea’s strawberry fields and picking fruit.

Indonesians, many of whom have never seen snow, enjoy ski trips to Korea.