Samsung, LG to strut their stuff in Vegas

Samsung, LG to strut their stuff in Vegas 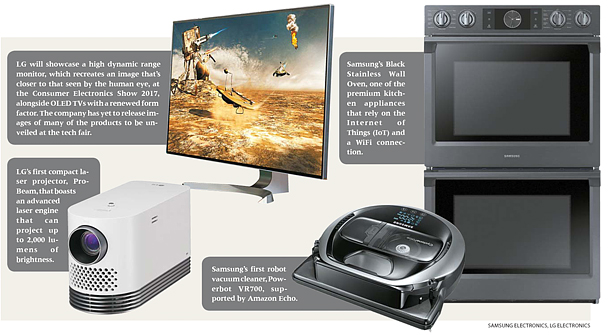 “From the Internet of Things (IoT), to virtual reality to self-driving cars and beyond, connectivity is at the core of emerging innovation,” said Gary Shapiro, president and CEO of the Consumer Technology Association, which runs CES.

Korean tech behemoths Samsung Electronics and LG Electronics will use the world’s biggest consumer electronics fair, which opens in Las Vegas Thursday, to unveil their latest home appliances and TVs - all equipped with futuristic technologies.

LG has plans to showcase an array of home appliances - refrigerators, robot vacuum cleaners, air conditioners and washing machines - that have applied deep learning technology to better understand their users by gathering and studying customers’ patterns over time.

“Deep learning technology is the next phase in the evolution of smart appliances, and as an industry leader, we have the responsibility of being an early mover,” said Song Dae-hyun, president of LG Electronics’ home appliance and air solution division.

He noted that aside from the advanced capabilities of these appliances, companies will also have to worry about what to do with data collected by them.

“We believe performance and convenience do not mean having to sacrifice security and privacy. They can and should exist simultaneously,” Song added.

LG’s deep-learning smart refrigerator can perform a variety of tasks by predicting a family’s activities based on their past behavior, such as automatically filling an ice tray at the time of the day when cold drinks are most in demand.

The fridge can initiate a four-stage sterilization system on its own to extend food life when it senses temperature and humidity conditions that may contribute to food spoilage in summer.

Its new robot vacuum cleaner will also be able to recognize objects in rooms, remember obstacles and react accordingly by capturing surface images of the room. The intelligent cleaner learns to avoid obstacles over time. It can tell the difference between a human and a chair and is programmed to ask an obstructing person to move out of the way.

“At the upcoming CES, we need to pay attention to smart home strategies based on artificial intelligence platform,” said Lee Jung, an analyst at Eugene Investment and Securities. “The tech industry will see a variety of AI-based services and conversion between them will spearhead a revolution in the industry as well as society.”

Samsung is betting on premium kitchen appliances that rely on the IoT to cater to ever-escalating interest in high-end, built-in home appliances. All of those gadgets, powered by Wi-Fi and Bluetooth connections, can be remotely monitored and controlled by smartphones. The devices will work with Samsung’s SmartThings Hub, which brings app-enabled security cameras, plugs and other smart-home devices together on a single platform.

Coming in two sets of colors to give a hint of luxury - metal design and black stainless - the built-in kitchen appliance lineup Samsung is showing at CES 2017 will range from refrigerators to wall ovens, combination microwave ovens, cooktops, rangehoods and dishwashers.

“The premium built-in home appliance market is growing constantly and Samsung plans to beef up its competitiveness in the North American market with products with outstanding design and smart features,” said a Samsung spokesman.

As the profitability of run-of-the-mill consumer appliances is undermined by Chinese manufacturers grabbing market share, Samsung has been shifting to premium products with higher margins. It acquired Dacor, a leading luxury kitchen appliance maker in the United States, for $100 million in August.

Amazon, for example, has been letting other companies build its Alexa AI voice assistant, which boasts the ability to control connected devices throughout a home, into their own products since last year.

Most recently GE has unveiled a prototype of an LED table lamp that is basically the Amazon Echo with an LED ring that arches over the top of the speaker.

At CES, Samsung is set to debut its first robot vacuum cleaner supported by Amazon Echo, so it can react to verbal commands. The Powerbot VR700 is less than 4 inches tall, 28 percent thinner than the previous version, and offers suction power of up to 20 watts.

With regard to TVs, which usually draw the most attention at CES, Samsung is expected to take the wraps off a new class of TV: the third-generation quantum dot light-emitting diode (QLED) TV, an upgrade from super-ultra high-definition TV in terms of resolution and color volume. Samsung has yet to elaborate on details.

The world’s No. 1 TV maker is also getting ready to launch new services on its indigenous Smart Hub platform that will offer personalized content to consumers based on their TV preferences in three categories: sports, music and TV Plus. The third will offer Internet protocol-based channels focused on premium content services - meaning customers will no longer have to wait for cable services to watch marathon sessions of their favorite TV shows.

LG, Samsung’s high-definition TV rival and currently the only manufacturer capable of mass-producing big-screen organic light-emitting diode (OLED) TVs, is set to unveil a new OLED TV that is equipped with an entirely renewed form factor that will distinguish its design from existing TVs, industry insiders say.