Choi Sunu (1916-84) helped Korean crafts to be considered more than just “old junk,” but rather art. [NATIONAL TRUST OF KOREA]

In the 1970s, Koreans didn’t think old furniture or kitchenware in their households could be considered “art.”

It was an era in which the people were immersed in the nationwide industrialization drive known as the Saemaeul Movement and admired urban lifestyle and foreign culture.

But it was also in that era that Choi Sunu (1916-84), the legendary art historian and director of the National Museum of Korea, organized a massive exhibition of Korean folk and craft art.

It was quite an unprecedented move. In fact, some even go as far as to say that the history of Korea’s ancient art can be divided as before that exhibition and after that. Before the show, art critics considered only calligraphy and ceramics as art and not craft items.

Kim Hyung-kook, the chairman of Gana Foundation for Arts and Culture, said it is Choi that helped “things of the past [be] considered as ancient art and eventually cultural heritage.

“Like the saying, ‘one genius’ eye stands for a thousand people’s eyes,’ Choi had that extraordinary eye.”

As this year marks the 100th birthday of Choi, Gana Art Center arranged an exhibition which showcases more than 650 pieces of Korean craftwork from the 18th to early 20th centuries. It’s a tribute to Choi and what he has done for Korean antiquities.

Park Young-kyu, an honorary arts professor of Yongin University, curated the exhibit. Park, who is also the chairman of the board of Korea Craft & Design Foundation, actually worked with Choi for the historic exhibition at the National Museum of Korea in 1975.

“The value of craftwork lies in practicality, not just its aesthetic beauty,” he said at a press event held earlier this month. “The items are displayed by its functions and where in the house they were used, like gyubang [women’s quarters], kitchen and sarangchae [men’s study].”

But perhaps what really makes the Gana exhibit special is that the items are mostly from personal collections, Park pointed out. In other words, they are not items that one would have seen at previous exhibitions. “We are grateful for the help of those who collected these exceptional craftworks quietly all these years.”

Organizers attempted to introduce a wide spectrum of craftwork from the period through various materials and techniques.

Case in point: An ox-horn plated box from the 18th century. The box is known to have been made with the horns of at least 60 oxen. Making craftworks using ox horn is a technique that was a trend during the latter part of Korea’s Joseon Dynasty (1392-1910). Artisans flattened the ox horn and pasted it onto the surface of the box to add color and glitter. 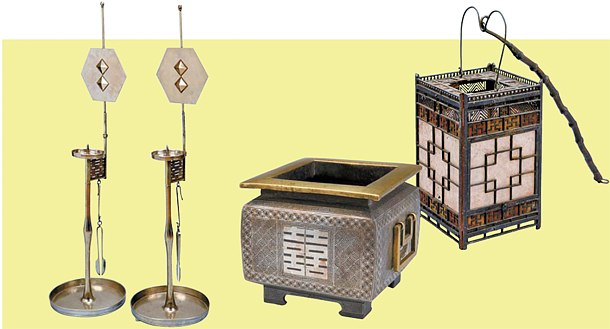 A glazed water jar from the 20th century with abstract curves carved onto the surface and a stone medicine kettle from the 19th century with an octagonal shape embody the typical Korean aesthetic that’s humble yet graceful.

“What we learned from Choi has become the basics and barometer for treating craftwork from the Joseon Dynasty,” Park said. The exhibit is an extension of the 1975 exhibition organized by Choi, Gana officials said.