Kim says North is in ‘final stage’ of testing ICBMs

Kim says North is in ‘final stage’ of testing ICBMs 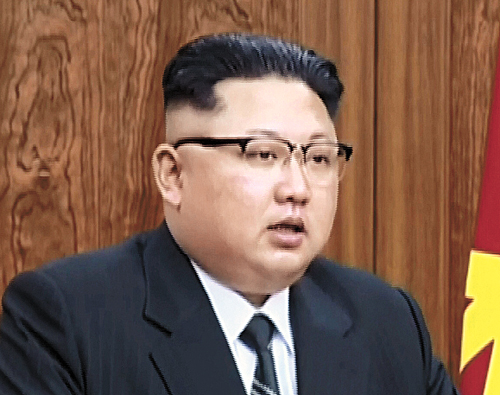 Kim did not mention any specific date or target for the drill, or how he intends to achieve it, but he claimed his regime is militarily prepared to take the symbolic step for protecting his country against “imperialist states,” which will make the North a “mighty socialist power.”

In the 30-minute speech given at 12:30 p.m. South Korean time, or noon in the North, Kim praised Pyongyang for having risen to become a “nuclear power state of the East,” crediting last year’s “successful” firing of a long-range missile and detonation of a hydrogen bomb.

The leader, who came to power in December 2011, following his father’s death, also vowed to produce “more self-developed weapons” in the future, saying he will “continuously strengthen” the North’s preemptive-strike capability.

This provides proof that he has no intention of complying with international pressure to curb his nuclear ambitions.

While mentioning President Park Geun-hye for the very first time in his annual New Year’s message, Kim lashed out at her for siding with the United States in the regional dynamics of Northeast Asia, saying she was “finding her way to live” by going against North Korea, which, he said, is populated with essentially the “same people” as the South.

At one point, Kim mentioned the rising antigovernment sentiment in the South, saying that national protests were an “explosion of resentment” against the conservative administration, which for a long time has held the South under the rule of a “fascist dictatorship” and “sold” its country to other powerful states.

Kim also noted that 2017 marks the 45th anniversary of the July 4 North-South Joint Statement, adding that both sides must “herald a grand path toward independent reunification.”

The 1972 joint statement was a historic moment, when both Koreas exchanged their views of the “mutual desire for the early peaceful reunification,” vowing to make progress in mutual understanding of each other’s points of views.

One of the three key principles agreed to that day was that reunification must be achieved independently “with no reliance on external forces or interference.”

The South’s Ministry of Unification on Sunday expressed “strong denunciation” of the North’s claim to be almost ready to fire an ICBM, adding that it was “regretful” Pyongyang was blaming Seoul for their strained relations.

The ministry also demanded that the North “immediately stop” meddling in internal affairs, warning that if Pyongyang continues to rely on nuclear development, it “will face even stronger sanctions and pressure.”

Pyongyang’s statement comes at a time when local pundits agree that North Korea will likely fire a missile or conduct a sixth nuclear test early this year, perhaps in time for U.S. President-elect Donald J. Trump’s formal inauguration on Jan. 20.

According to the Institute for National Security Strategy, a public research center under the South’s National Intelligence Service, other possible dates for the provocations are the upcoming Sunday, Kim Jong-un’s birthday; Feb. 16, the 75th anniversary of Kim Jong-il’s birth; and April 15, the 105th anniversary of Kim Il Sung’s birth.

As reclusive as all North Korean matters are, it is unclear exactly how far Pyongyang has come with its ICBM technology, although most international pundits agree the regime has yet to reach a highly sophisticated level.