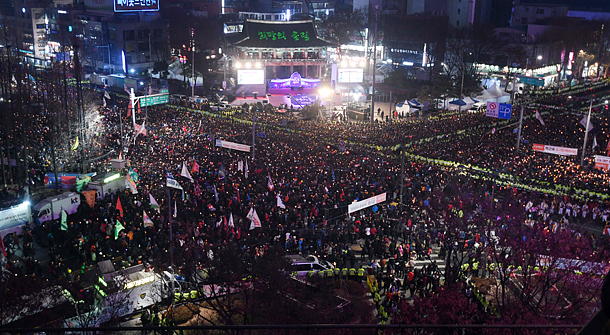 Protesters gather in front of the Bosingak Belfry in Jongno District, central Seoul, for the symbolic New Year’s ringing of the bell on Saturday, after marching down the streets calling on President Park Geun-hye to immediately step down. [YONHAP]

Ten-year-old Choi Jae-woong hopes to live in a “free world” where success relies on how “nice” one is to others.

In his view, President Park Geun-hye set a bad example for the young generation in 2016 by allowing her friend, Choi Soon-sil, to meddle in state affairs and illegally amass wealth.

“I want Korea to be a country where the president doesn’t go off telling confidential information to bad people, ” said the fourth-grader from Gangdong District, eastern Seoul, who joined the last Saturday anti-Park rally of 2016, the 10th rally in a row.

Choi Jae-woong was one of a million people who gathered in Gwanghwamun Square, central Seoul, to call on President Park to immediately step down for her massive abuse of power scandal.

According to figures presented by the rally organizers, 104,000 more showed up for rallies in other cities, bringing the total number of protesters on Dec. 31 to roughly 1.1 million nationwide.

The organizers, a coalition of various civic and labor groups, made it clear they plan to continue gathering every Saturday until Park actually leaves office, which might not be until next spring.

The Constitutional Court, which by law has until June 6 to rule on whether to remove Park from office, warned that the trial will not be as short as public or opposition lawmakers hope it will be.

“I hope we can go on with our lives and not have to worry about anything else,” said Kim Jin-guk, a 35-year-old entrepreneur from Suwon, Gyeonggi, when asked about his New Year’s wish. “Most importantly, I hope the new year brings justice.”

Cho Bong-hyun, a 23-year-old college student in Daegu, said he hopes the economy will bounce back, and that one way to accomplish that would be for President Park to get out of the way.

“I hope she leaves office early so the economy can revive and put a lot of good jobs in the domestic market,” said Cho.

Yoo Seong-un, 46, an office worker in Gwanak District, southern Seoul, said he wanted to teach his two daughters and son — ages 6, 4 and 2 — about equality, and that members of Korean society deserve to be given equal opportunities.

“They were born in the fourth industrial revolution,” said Yoo, “and I think they have to get used to the changing times. During this social transition, I hope society teaches them that everyone starts at the same level.”

“Regardless of whether you’re a conservative or a liberal,” said the 75-year-old, “I hope people work for what’s best for the country.”