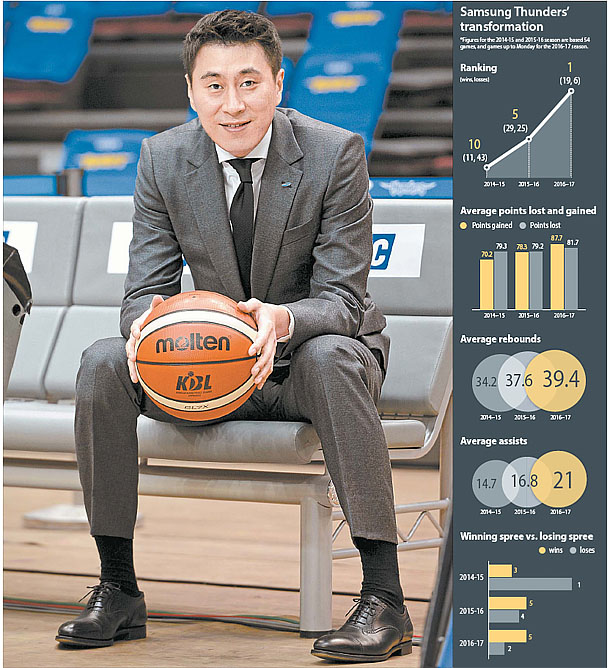 Coach Lee Sang-min of the Seoul Samsung Thunders used to be the star of the team as a basketball player. Yonsei University’s basketball team was at its zenith with Lee, 44, who earned the nickname “Computer Guard” with his machine-like accuracy as a point guard in the professional league, and his team had made it to the final match of the Korean Basketball League (KBL) seven times.

In 2014, Lee retired and took on the job of coaching his current team. But under his guidance, the Samsung Thunders didn’t exactly roar. In the 2014-2015 season, the team finished last, with 11 victories and 43 defeats.

One of the games even recorded the biggest losing margin in the history of Korean professional basketball - 54 points.

Players shot free throws that barely touched the rim and even tossed the ball to the coach, who was sitting on the bench.

Fans would console Lee with sarcasm, saying, “the coach of the cellar-dwelling team has a harder job than cleaning the outer windows of the 63 Building [a skyscraper with 63 floors].”

“In my first season as a coach,” he said in a recent interview with the JoongAng Ilbo, “[Seo] Jang-hoon told me ‘Hey, even Gregg Popovich couldn’t lead this team. Anything will be possible if you start cheering up.’ That kind of consolation helped.”

Seo, a 42-year-old former basketball player and currently a TV entertainer, also remembered the incident. “Sang-min just seemed so down back then and kept blaming himself,” he said, “saying things like, ‘I’m too embarrassed to keep doing this.’ I think he had a really tough time.”

Lee and Seo met as roommates in their teens, while they were training at the national junior basketball team. The two got on very well.

When the younger Seo followed Lee into Yonsei University, the duo brought glory to the school’s team with multiple victories and fame. Lee even asked Seo to coach with him for the Samsung Thunders, though Seo declined.

Last year, Samsung seeded fifth in the playoffs. Now, Lee’s three years of effort as a coach has started to bear fruit. The Samsung Thunders sits in first place.

“Lee has worked a very nice spatial balance between the inner and the outer ground,” said Seo, “and he’s just changed one guard and a foreign player to do that. It’s impressive to see that he’s brought out the potential of Kim Tae-sul [the current point guard] as a star guard himself. I watch Samsung’s games whenever I get the chance.”

The foreign player Seo mentioned is Michael Craig, scouted in the second round of the draft. Craig was refused by other teams because of his overly sturdy physique of 1.88 meters (6 feet 2 inches) and 117 kilograms (258 pounds). Yet within Craig, Lee saw his former teammate, the Johnny “The Tank” McDowell.

Right before the beginning of the season, Lee also scouted Kim at his alma mater. Kim, once dubbed the “Magic Kid,” had been struggling after joining the Jeonju KCC Egis in 2014.

His magic didn’t prove to be magical enough for the 600 million won ($498,000) contract, and he was traded for Samsung’s Lee Hyun-min.

That’s where Lee came in, waving his wand.

Heeding Lee’s guidance, Kim has now sharpened his competitive edge and has scored the fourth most number of assists in a game with an average of 5.8.

“Tae-sul is just like me, [Kang] Dong-hee and [Kim] Seung-hyun,” said Lee. “An authentic point guard who leads the team. Rather than changing his play style, I just corrected his positions and gave him more time with the ball to boost his confidence.”

Lee transformed the lagging team into something resembling the one he used to play for back in the day. “Basketball isn’t played by joystick,” Lee said. “Even if a player struggles a little, you just have to believe and stick with him. I think that a great player makes a great commander, rather than the other way around.”

The players showed their gratitude by shooting an average of 87.7 points per game, the second highest in the league. When asked about Seo, Lee said, “He acts like an ordinary fan, but sometimes he gives strategic ideas. I watch TV shows Seo is on in between monitoring games. I’m glad the viewers like his honesty.”

When asked about the future of Samsung Thunders and its coach, Seo answered, “Lee had always been very firm when it came time to decide. If the players trust him and follow his lead, then getting to the finals won’t be a problem.”