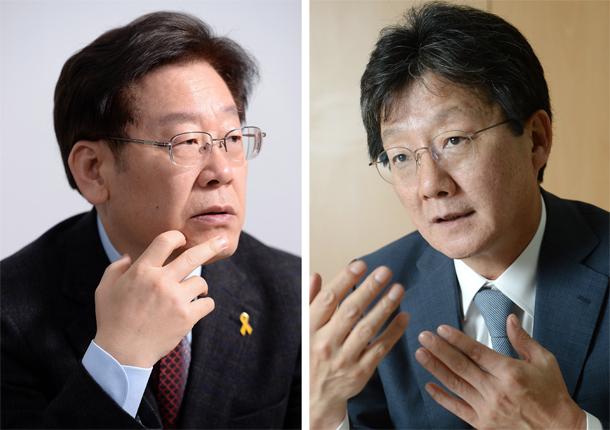 Lee Jae-myung, the mayor of Seongnam, and Rep. Yoo Seong-min are the dark horse candidates in this year’s presidential election. Both of them are dreaming of a turnaround in the upcoming presidential election, expected to take place as early as late April. It will be a fierce competition, but they also share a strange sense of similarity. They both think they will have a chance if Moon Jae-in and Ban Ki-moon stumble. The JTBC debate will be a debut for Yoo in the presidential election and an opportunity for Lee to pull up his rating.

The key term for Lee’s conservatism is “rule of law.” He based his strategy for welfare policy on the Constitution. “The State shall have the duty to endeavor to promote social security and welfare,” clause 2 of Article 34 says. Lee interpreted this to mean “the country must save as much as possible from its fiscal budget and invest in welfare programs.”

“Working class” has long been a term dominated by the opposition parties. Yoo, in 2014, sponsored a bill to create the basic law on social economy. The bill intends to offer the central government’s support for the self-employment activities of the working class citizens whose lives were ruined by the failure of the market.

The Federation of Korean Industries demanded that Yoo’s bill be abolished for its antimarket and socialistic concept. The business lobby is now facing a shutdown for its key role in the cozy relationship between politics and business that distorted the market.

It is an era of low-growth and low-employment capitalism. The idea of social economy is an attempt to compliment the market. It is the least necessary measure to maintain the system.

The conservatives change to preserve. The Brexit and Trump phenomena are cases in which a system changed to such an extreme degree that it becomes impossible to protect a community. Unless they make a drastic change, the heart of global capitalism will have been destroyed by the revolting outsiders.

Whether it is the right or the left, the ruling party or the opposition, those who pretend to change are now being called the establishment and facing criticism. The people decided to bring down the hammer and destroy the political establishment. Only the politicians who are capable of meeting their expectations can survive.

British Prime Minister Theresa May, who came to power after Brexit, declared that her Conservative Party will completely stand for the laborers. She proposed that laborers and consumers will participate in the board of directors of companies and limit the salaries of corporate executives in order to resolve the wage gap.

May’s declaration far exceeded the imagination of her competitor, the Labour Party. The Conservative Party has existed for a long time and continued to be popular with the electorate because it managed to change its color boldly and preemptively at every turn of history.

It is desirable that the TV debate between Lee and Yoo will quickly introduce the agenda of the working-class conservative. When Yoo promotes his theory of the working-class economy and Lee ridicules fake conservatives, their agenda will instantly catch fire. Only then will the people’s energy, demonstrated through the candlelight protests, go beyond political reform to bring about a remodeling of society and the economy.

The candlelight protests drove out the ruling party, which was controlled by the loyalists of President Park Geun-hye, who turned Korean society into the paradise of the establishment. Now, the presidential candidates must open a new path. The politics of power and hegemony that are clearly based on factionalism will now face their end.