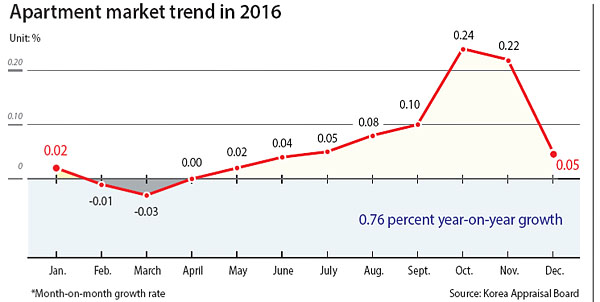 
The year 2016 was not a bad one for real estate if you were buying in the greater Seoul area, particularly the popular Gangnam districts south of the Han River, where expectations for newly redeveloped apartments sent prices skyrocketing.

But measures enacted by the government in November to cool the heated market could have a lowering effect on prices for the coming year, according to several analysts.

In southern Seoul’s Seocho District, units in the New Banpo Xi complex were going for 44.6 million won ($37,000) per 3.3 square meters (35 square feet), the most expensive apartments in the city. The bidding ratio stood at 37.8 to 1, and all purchasing rights for apartments sold out just six days after contracts were signed.

Such sentiment spread to other major cities like Busan, where the bidding ratio at the Myeongryun Xi complex built by GS E&C in Dongnae District went as high as 523 to 1 in September, the highest recorded. Busan’s apartment prices kept rising throughout the year and jumped 3.65 percent by November.

The booming real estate market stoked fear that growing household debt could negatively impact the economy when interest rates go up again, leading the government to enact measures to cool the market. Since their implementation, apartment prices in Gangnam have seen a downturn. Between Oct. 31 and Nov. 7, prices fell 0.02 percent. The most drastic fall was from Dec. 12 to 19, when prices fell 0.11 percent.

Since then, the general consensus by market experts has been that the current downturn is likely to extend into next year.

“This trend will especially be conspicuous in Seoul and nearby areas where the government put heavy restrictions [on real estate investment],” said Park Hyun-wook, an analyst at HMC Investment and Securities. “Demand for short-term investment opportunities will further drop. Although not a complete collapse, the market will see a slight decline.”

Gunny Kim of NH Investment said in a November report that the government’s measures were an “anticipatory move” that will “prevent the market from further heating up.”

But Baek Kwang-je, an analyst from Kyobo Securities, believes prices in the long term will continue to rise.

“Apartment prices did drop since the new regulation went into effect. Looking at each point in time, for example on a weekly basis, it may look like a declining trend,” Baek said. “However, looking at this from a larger frame, on a yearly basis for instance, such drops are just momentary events and will not affect the market trend as whole.”

Baek argued in his recent report, 2017 Industry Outlook, that factors lifting the market next year will more than offset negative elements. “Regulatory policies will not be able to overcome market supply and demand,” he wrote. “We have seen similar measures in 2003. The regulations then were tougher, but they couldn’t overcome the market momentum and real estate prices continued to soar until the 2008 financial crisis.

Analysts also held varied outlooks about the number of new apartments that will become available in 2017.

“With more apartments ready for people to move in, the demand for jeonse [lump-sum deposit rent contracts] will sink, adding another unfavorable market condition,” said Park from HMC Investment and Securities.

Budongsan 114, a local real estate information provider, held similar sentiment that the increased availability of apartments will lead to a fall in jeonse demand and prices. Some owners unable to rent out their units will be forced to put them up for quick sale, further pulling down prices, according to Budongsan 114.