[SIGNS OF RECOVERY] Analysts: Market moderate as IT, bio grow

[SIGNS OF RECOVERY] Analysts: Market moderate as IT, bio grow 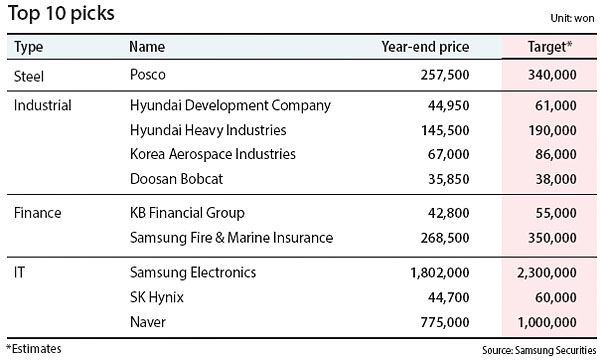 
Local market research firms have mixed views on how this year’s Korean stock market will perform.

The global economy is expected to remain sluggish this year as well and market analysts are predicting it will be another tough year for Korean businesses due to uncertainties rising from the ongoing corporate restructuring in the nation, which is dragging down both domestic consumption and investments, and from the incoming administration in the United States that is likely to pursue more protectionist trading policies.

To make things worse, the political scandal surrounding the president and her confidante Choi Soon-sil is likely to limit the government’s power to proceed with fiscal policies to boost the economy, and companies doing businesses with China are anticipating a tough year as political conflict between the countries rises.

Although many sectors are expected to remain weak, some market analysts predicted a few industries such as the IT, semiconductor and medical devices will perform well this year as their market conditions are improving.

“Even though the global market is expected to be sluggish in 2017, semiconductors, display panels, IT, health care and bio sectors might become the heroes of next year as they are likely to benefit from the expanded investments towards them,” said Oh Tak-keun, an analyst at Mirae Asset Financial Group.

Many experts have predicted display panel manufacturers will have a bright year in 2017 as more smartphone manufacturers use OLED screens.

“There is a high possibility of Apple to adapt OLED panels for their iPhone 8 products expected to be released in 2017,” said Kim Kap-ho, an analyst at Kyobo Securities. “About 35 percent of iPhone models to be released this year, or about 63 million to 77 million units, will have OLED screens and the proportion is expected to go up as high as 93 percent of total units in 2018.

“As Apple decides to use the OLED market, the share of smartphones with OLED screens will grow from 24 percent of the total this year to 30 percent next year. The figure is expected to reach nearly 50 percent in 2019.

Samsung Display is the only company in the world that mass-produces OLED screens for mobile devices, and the company could benefit from Apple’s choice, Kyobo explained.

Kyobo also expects local insurance firms will perform well, as it is expected that the key interest rate in Korea is likely to be raised following the interest-rate increase in the United States.

“The share of life insurance companies has hit its bottom ceiling due to the record-low interest rate in Korea,” said Kim. “However, it is expected that the key interest rate will rise from now following the rate hike in the United States, and insurance firms benefit from the rate hike.”

Shinyoung Securities projected Korean companies listed on the Kospi market to experience 12 percent growth in their operating profit in the first quarter. During the same period, Shinyoung said the IT sector will enjoy 30 percent growth and the material sector to grow by 27 percent.

In the second quarter of this year, Shinyoung projected the health care sector to grow the most at 35 percent, followed by the IT sector with 19 percent, while average firms in the Kospi market will see growth of 6 percent.

“The Kospi market is expected to start off weak in the beginning of the year but to rebound later this year due to the possible changes in policies in the incoming administration and the concerns over the additional interest hike in the United States in the first half of the year,” said Chung Dong-hyu, an analyst at Shinyoung Securities. “The upcoming elections in Germany and France might also have negative impacts as well [due to the possibilities of the current form of the Eurozone], but the Kospi market will recover after all these worries go away.”

Samsung Securities has picked 10 companies that will do well in 2017 and four of them were industrial-related companies, such as Hyundai Development Company and Hyundai Heavy Industries. Another three companies were IT firms like Samsung Electronics and SK Hynix, and the other two were financial institutions, including KB Financial Group.

“2017 is likely to be a year where the Korean stock market will move from a slowdown stage to recovery or expansion stage,” said Huh Jin-wook, an economist at Samsung Securities. “Retail, semiconductors, automobiles and IT are some of the sectors that will perform well when the market finally moves into the recovery stage.”