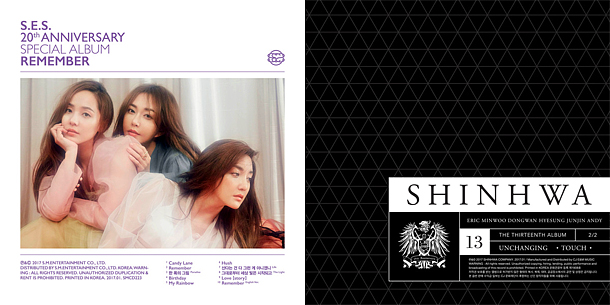 The long-awaited return of the popular ’90s girl group S.E.S. finally arrived with the release of their 20th-anniversary special album “Remember.” The group has been celebrating their reunion with a number of activities including a two-day concert that concluded on New Year’s Eve. S.E.S. said that 20 percent of all proceeds from their reunion efforts will be donated to charity.

The veteran boy band Shinhwa, which debuted one year after the girl group in 1998, released their 13th full-length album “Unchanging - Touch” on the same day. Although the record contains 10 original tracks, the latter half of the track list was previously released earlier on Nov. 29 in a “preview” mini-album called “Unchanging Part 1 - Orange.”

The boy band is embarking on a short tour next month in support of their latest album release. They will play at the Nangang Exhibition Center in Taipei, Taiwan, on Feb. 4 and then fly back to Korea for a show in Busan on Feb. 11 and Daegu on Feb. 25.