Staying in to work out at home : YouTube, Instagram help those who lack time, money get fit

Staying in to work out at home : YouTube, Instagram help those who lack time, money get fit 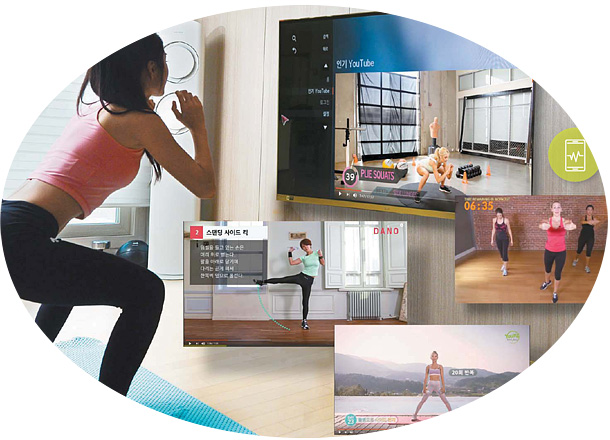 Many people opt to work out at home, like 26-year-old Go Eun-a (right), as they can do it whenever they want and it is free. People usually go online to download and play workout videos to practice movies. Below are three screenshots of some of the popular workout videos that have gone viral online. [JOONGANG ILBO]

“Lose weight,” is at the top of many recurring new year’s resolution lists.Many confidently think that things will be different this year, and sign up for a gym in early January.

Many are going through the same ritual again, but this year’s exercise trend is different. Instead of leaving their cozy, warm homes in the winter months, many are getting fit by bringing the gym to their living rooms through so-called home training.

A simple YouTube search for “Home Training” brings up many videos of ordinary people telling viewers how they achieved lean and muscular bodies. Some say they got their amazing six packs with just one roll of the yoga mat.

English instructor Go Eun-a, 26, has been working out at home alone for about three years. She watches videos posted on many different social media sites such as YouTube, Facebook and Instagram and follows the instructions in the videos.

She’s mostly watched videos by well-known American trainer Rebecca Louise, who became famous after singer and actress Miley Cyrus lost 20 kilograms after following Louise’s leg workouts. Her 18-minute video has been downloaded more than 210 million times since it was posted in 2013. Go, who was extremely underweight at 38 kilograms (5.9 stone) when she started the programs in 2014 is now 48 kilograms and has much stronger legs.

“As I first started working, I didn’t have enough time to go to a gym even when I wanted to work out,” said Go. “The best part of home training is that you don’t need to worry about when and where to work out, and you can still get some professional-level training.”

Think you won’t be able to keep up with an exercise program alone? Then find a partner to work out with on social media.

Jeong Mi-yeon, another office worker, also exercises at home. She uses her Instagram account to communicate with others to keep herself motivated. She posts a photo of herself after her daily workout, using it as a workout diary. She usually spends about two hours working out with one hour on a cardio exercise, such as cycling or walking up the stairs. She spends another hour on a mat working her muscles. She’s dropped about 10 kilograms from her original weight of a little more than 60 kilograms.

“Because there is so much information on many different types of workouts, as long as you have a will, you can do a professional-level workout at home,” said Jeong.

In a survey Trend Monitor conducted in 2014 on 1,000 men and women, 60.8 percent of them said they were more envious of people with great bodies than with good looks. Although many long for a balanced body shape, the reality is that even more don’t seem to work out. 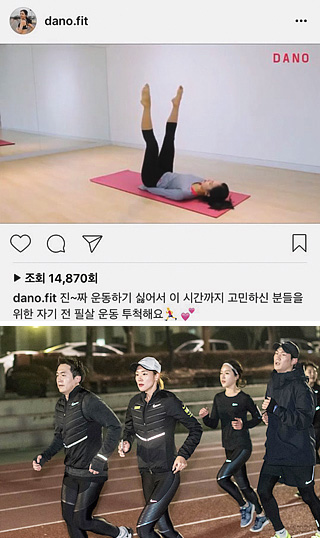 Top: To keep a record and share workout information, many people religiously post photos and videos of their workout sessions on Instagram. Above: Nike offers a running club for free to provide amateurs tips on how to run fast.

In Korea Health Promotion Foundation’s report in 2015, Koreans said they don’t have enough willpower (48.9 percent), are too busy with their daily routines (43.1 percent) or are too financially burdened (25.8 percent) to go work out.

Home training targets all of those people, who don’t have time, money or the motivation to go to the gym. Instagram is flooded with keywords such as “home training” and “healthstagram”, and some of the related hashtags have more than 1 million mentions.

Kim Eun-ji, who is better known by her nickname Congpilates, started to post herself working out at home in 2012, with videos she took to check her posture. The videos have gone viral and she has seen a phenomenal increase in the number of her followers on social media, from around 7,000 people in 2014 to about 230,000 recently. She posts relatively shorter five -to 10-minute videos on Instagram and Facebook while 40-minute videos are uploaded to YouTube. Around 25,000 people subscribe to her YouTube page and her videos have been viewed more than 1.4 million times. Many comment that they have started working out after being inspired by Kim’s abdominal muscles.

“I tend to edit the videos so that people can easily follow [what I do,] and I also try to add detailed explanations as much as possible,” said Kim. “Since it is more effective to do a workout one can easily make a habit of doing, the content for home training seems to get more popular.”

There are many other “healthstagrammers” like Kim online. Dano TV, which runs a home-training page on YouTube has accumulated more than 100,000 subscribers in about a year since its launch. The page features Jessi Unni (Sister), who has lost 20 kilograms, sharing her secrets on workouts, dieting and daily management.

Yun Mi-jeong, manager for YouTube’s partnership team said, “Some of the fitness channels overseas have been garnering much popularity and carry over 3 million followers.

“Korea recently has seen more such fitness channels opening introducing how to do yoga or pilates, and the overall watch time of these videos also increased by 50-fold in the past year.”

With the increasing number of people working out at home, the market for workout gear also has grown. From the basic and simple yoga mats, foam rollers and dumbbells, to big gear like rowing machines, equipment is selling like hotcakes. On online shopping outlet Gmarket, items for yoga or pilates increased 4 percent from January to November last year, compared to the same time the year before. Auction, another online shopping site, saw sales of a rowing machine jump more than threefold from Nov. 19 to Dec. 18 last year.

“We have seen more sales of machines that can help one do some high-strength work out at home away from the cold temperature outside,” said Lee Jin-young, a director of the company’s living and leisure team. “While items that you use with your hands like kettlebells were popular in the past, now the machines that can give you a hardcore workout are getting more spotlights.”

While there are many working out at home alone, some are looking for teams to work out with, as many of the sports brands offer free classes on a first-come, first-served basis. Homemaker Kim Jeong-min, 47, has been attending a Monday yoga class organized by Canadian sports brand Lululemon at the store in Parnas Mall in Samseong-dong, southern Seoul.

“The class is a one-time thing so I don’t really feel a burden when signing up,” said Kim, adding that she also likes that it’s free.

The sports brand also holds another class on Thursdays, which is particularly popular among people who are starting yoga for the first time. The company also runs a yoga class for men and a running class at its flagship store in Cheongdam, southern Seoul, in addition to a yoga class for women.

“We take reservations for 10 classes each time, and usually the spots get filled up within two days since the sign-up becomes available,” said Yu Ye-seul, manager at Lululemon.

Classes by Nike are also popular. Kim Eun-jin, a 31-year-old office worker for a cosmetics company, sometimes goes out with the running club. “I get better records in the team than running alone as there is a pacer running together with you,” said Kim. “There are different groups based on the speed you can go, and when you take a look at the group with faster people, you get more inspired.” 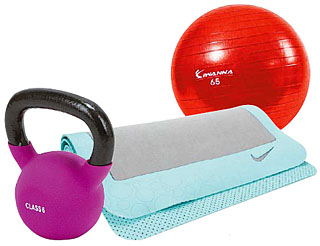 A kettle bell, left, a yoga mat and an exercise ball are a few of the popular items for home training.

The running club recruits participants every Sunday for each session on the website. There are classes for beginners and some to train people to get faster. Professional coaches and pace keepers join to provide more professional style running experiences. The classes usually get fully booked within a minute after the website opens.

“The sessions here are different from any other existing running groups done with people who go to the same school or company,” said coach Irene for the Nike’s running club.

“The younger people generally show more excitement as the event is a one-time thing without much commitment where one can get professional training with people who pursue a similar style of workout.”

Some people gather to run together just because they are physically close. Jamsil Running Club, also known as JSRC, holds its run with members at 8 p.m. Fridays. Members usually run from 5 kilometers to 10 (3.1 to 6.2 miles). Sometimes about 50 people gather to run around Seoul. Runners can become official members after participating with the club more than five times.

Co-founder Lee Eun-gu has also tried to connect with running clubs overseas in Japan and the United Kingdom so that people traveling abroad can join the clubs there.

The main distinction of such community-based running clubs like Jamsil Running Club is that they are not exclusive. Runners can join anytime they want. About 100 people are registered as official members, but the Friday gatherings usually don’t exceed 50 people. At least 10 of the runners are newcomers. Kim Hye-min, who has been running with the club for the two years said the biggest characteristic of the club is its openness.