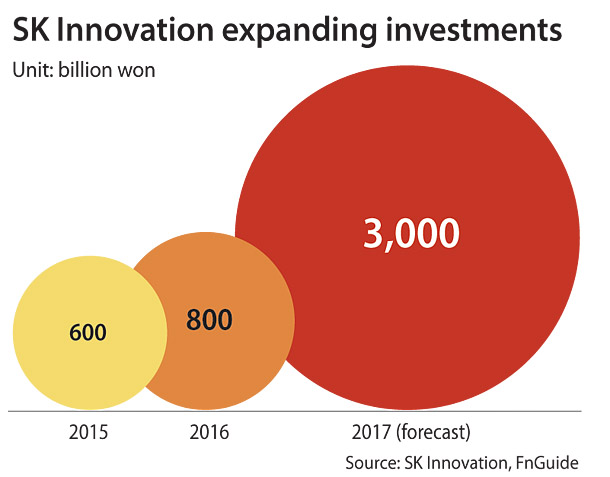 Boosted by favorable business prospects and recovering oil prices, Korean refiners are set to make some big investments this year.

At the forefront is SK Innovation, which plans to invest 3 trillion won ($2.5 billion) in chemicals, petroleum and batteries this year, the company said Sunday. That’s roughly four times the 800 billion won made in 2016.

One likely investment is an acquisition by SK Global Chemical of shares in Shanghai Secco Petrochemical Company. Half of Shanghai Secco is held by the company’s largest shareholder, BP, and is valued at nearly 2 trillion won, according to sources from the investment banking sector.

The company also aims to expand investment in businesses abroad. SK Global Chemical recently opened a global marketing headquarters in China to oversee its marketing strategies around the world. SK Innovation plans to move key employees of its petroleum business to Houston, considered the center of the petroleum industry, and make it the headquarters for the division.

In Korea, the company plans to expand its battery business, which is growing thanks to increasing demand for electric cars. An extension of two production lines at a factory in Seosan, South Chungcheong, is in the works, and a factory for lithium-ion battery separators, which is needed to make electric-car batteries, is being built in North Chungcheong.

An increase in the refining margin - the difference between the cost of crude oil purchased and the price at which the product is sold - and new markets for oil product exports all added to stronger performance by refiners.