‘Rogue One’ fails to top ‘Master’ in local box office

‘Rogue One’ fails to top ‘Master’ in local box office 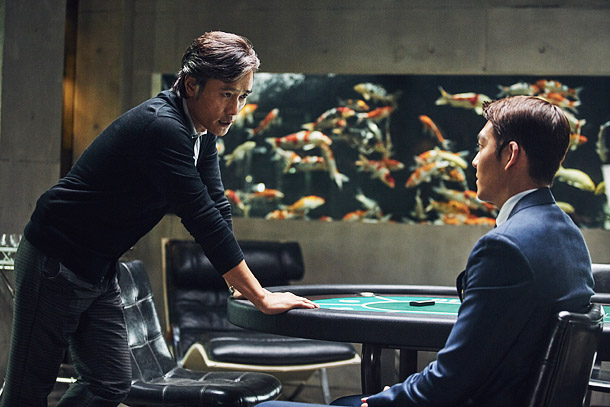 “Master,” which sold five million tickets in the 12 days since its release, ruled the local box office for a second straight weekend. [CJ ENTERTAINMENT]

The highly anticipated “Rogue One: A Star Wars Story” could not beat Korean crime thriller “Master,” which topped the local box office for a second straight weekend.

Starring high-profile actor Lee Byung-hyun, “Master” sold an impressive 1.37 million tickets from Friday to Sunday at 1,262 theaters nationwide, accounting for 43.9 percent of all sales. Despite criticism that it was yet another crime thriller that local viewers had already seen one too many times before, “Master” has so far sold 5.44 million tickets and raked in 44.17 billion won ($36.6 million), according to the Korean Film Council. It remains to be seen whether the CJ-distributed film will become the first movie in 2017 to reach the milestone 10 million ticket mark.

Gareth Edwards’ “Rogue One: A Star Wars Story,” which ruled the box office in North America upon its release last month, showed a weak performance in Korea. It debuted on Wednesday second in the box office and stayed there over the weekend, selling 523,000 tickets. The film has so far sold a little under 800,000 tickets in Korea.

Japanese animated film “Rudolf the Black Cat” came in sixth, followed by another Japanese animation “Your Name” that sold 71,800 tickets through previews before its official launch on Wednesday. The upcoming fantasy film about a body swap between a city boy and country girl has earned international acclaim and become the second highest-grossing anime after Hayao Miyazaki’s 2001 hit “Spirited Away,” earning director Makoto Shinkai accolades as the next animation king.

The fantasy romance “Will You Be There?,” an adaptation of French novelist Guillaume Musso’s best-selling 2006 book of the same title, ranked eighth. The Japanese animation “Pokemon the Movie XY&Z” came in ninth, and yet another Japanese animated film, “Doraemon the Movie: Nobita and the Birth of Japan,” rounded out the top 10 over the weekend.