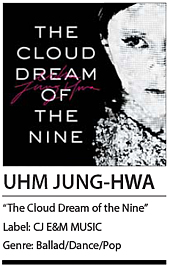 Anyone, regardless of their generation, will be excited to hear her famed songs at a party. With hit numbers like “Poison” and “D.I.S.C.O.,” the singer has rocked the house at concerts for many years since her musical debut in 1993.

Now, after eight years, the sexy diva Uhm Jung-hwa is back with a new album. Although it’s been quite a while since her heyday, time seems to run slowly for this energetic singer. For anyone who sees her hold the stage, it would be hard to believe she is already reaching her 50s.

Out of the nine tracks that form the album, Uhm first introduced four. One of the highlights, “Dreamer,” suits the singer well in that it shows her sensual yet mature traits. This electronic disco song is enough to let listeners recall her prime back in the 90s. Another highlight, “Watch Me Move,” samples deep house dance music.

Throughout the album, Uhm proves she still has what it takes.