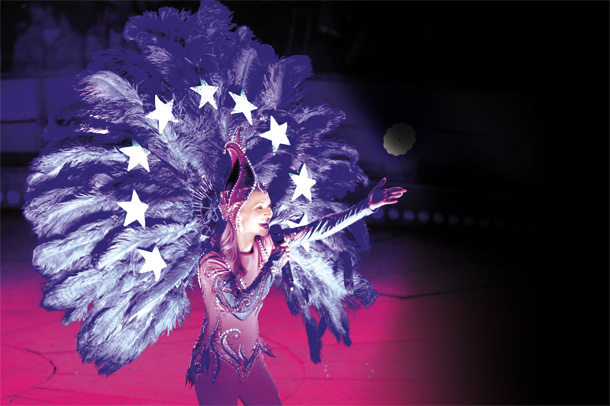 This polka-dotted tent has been there since Dec. 21, making passersby wonder what is going on inside - especially when they hear screams, gasps and cheers.

The tent, known as the Grand Chapiteau, is the portable venue of Europe’s largest touring circus team, the Great Euro Circus, which is visiting Korea for the first time.

For the Korea show, a troupe of 41 members of 12 different nationalities arrived in Seoul. They set up the Gran Chapiteau by the Han River for a show that will run until Feb. 26.

The circus is a somewhat unfamiliar genre of performing arts for Koreans. But because Koreans are the people of madangnori, the most similar form of show to a western circus, it wasn’t difficult for the Great Euro Circus to catch on with Korean audiences. This is its first visit to Asia.

For nearly two hours, various circus acts including acrobats, motorbike shows, a human cannon ball and a comical clown show excited audience members of all ages. As soon as the show began, a female trapeze artist appeared from on high, doing tricks on a rope as she descended. The kids’ favorite was the clown, who showed up with pink cheeks and a red nose, making funny faces and doing all sorts of whimsical tricks. The clown shows up between spine-chilling stunts, trying to keep things interesting for young audience members.

The highlight of the show is the Great Euro Circus’ signature Extreme Human Cannonball stunt, in which a performer climbs into a huge cannon that fires him to the other side of the tent. There’s also a motorbike show where five motorbikes do stunts inside an overcrowded steel frame sphere.

With loud engine noises and speeding bikers going round loop-to-loops, audience members find themselves hypnotized on the edges of their seats. Some of the challenging stunts, according to the troupe, are being introduced to Korea for the first time.

However, the act that made most men reach for their cameras was not the motorbike stunts but circus girl Dakota Webber, who showed off beautiful acrobatic moves while flying on a swing as her blond hair fluttered in the air. The show certainly has something for people of all ages and interests.

Webber, 23, is a niece of the current sixth-generation circus director Harry Webber.

The Great Euro Circus was formed in the early 1800s by members of the Webber family of Germany and members of the family have been carrying on the show for generations.

The Great Euro Circus’s “Stars of Euro” show will run until Feb. 26 at the Grand Chapiteau, which is installed in the multiplaza of the Yeouido Hangang Park in western Seoul. The show starts at 7:30 p.m. on Wednesdays and Thursdays and at 2 and 6 p.m. on weekends and public holidays. There are no shows on Mondays and Tuesdays.